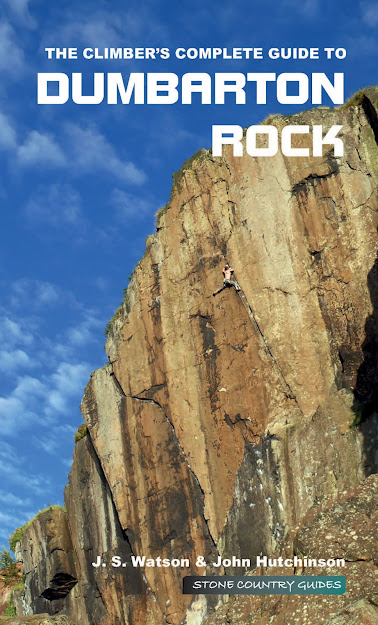 At last, the new comprehensive guide to Dumbarton Rock is here!
This guide is a product of years of endeavour and a testimony to a lot of time spent under some hard rock by generational communities of climbers.
It comes in at 160 pages. For one crag, that might seem excessive? But as John Hutchinson explains in his contextual introduction, the heritage of climbing at Dumby runs back six decades now (and it has a much longer social history). Brian Shields produced a handwritten guide in a Winfield notebook in the 1960s, complete with elegant topos and a list of the bouldering as well as the routes.
Some of this material found its way into the SMC general guides to the Lowland Outcrops over various editions, but with the explosion of sport climbing, bouldering, and a resurgence in trad (due in no short measure to Dave MacLeod's ascent of the incredible E11 route of Rhapsody) the Rock has become a mecca for any climber wanting to understand what Scottish climbing is all about and a deeper guide seemed timely.
So where is it? Dumbarton is a small town on the Clyde estuary west of Glasgow, with a distinctive volcanic dome of Rock standing sentinel at the water's edge. It is the last major town before you hit Loch Lomond and the Highlands. In climbing terms, Dumbarton is a good introduction to the traditions of climbing in Scotland. Its changes in focus over the decades reflect the variety of climbing found in Scotland: from the older traditional routes and aid routes up the walls to the sport climbs of the 80s and 90s, to the current explosion in bouldering, 'Dumby' is a world-class venue and always on the cutting edge of technique and standards. No-one finds it easy and it has a reputation for being hard and 'highball', intimidating and thrilling. Whilst this is true, many of the routes and boulder problems allow for some easier challenges and suit all levels and ages.
John Hutchinson, who wrote the introduction, sums it up best:
'... thousands of climbers who have spent time at the Rock, perhaps alone or working a project with friends, are the people who truly animate an otherwise static heritage. Outside of guidebooks and histories, the vivid sensations and emotions of countless climbers are embedded in real-time, providing the shared reference points around which a community of practice forms. In this manner, a rich and layered cultural geology has been laid down at Dumbarton Rock for the last 60 years. It is hoped this vibrant and distinct Scottish sporting heritage will one day be considered as our generation’s contribution to Dumbarton Rock’s remarkable history.'
You can get copies from your local outdoor bookshop, or direct online via the following distributors:
Cordee >>>
Climb Europe >>>
Amazon >>>
bouldering Europe Dumbarton Rock Dumby Scottish bouldering Scottish Climbing & Bouldering Scottish landscape
Location: Dumbarton, UK