Showing posts from March, 2021
Show All

The Metadata of Being Human 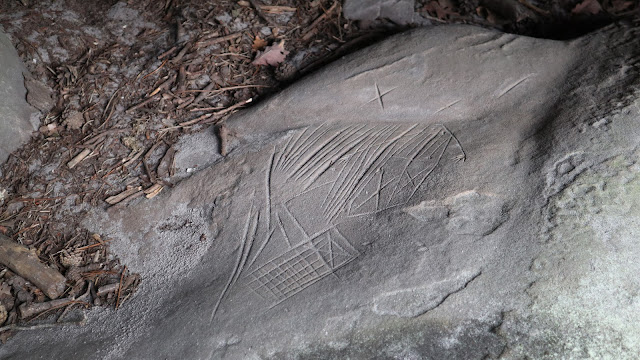 Shamanistic zoomorphs, lithic graffiti, hallucinogenic tableaux, territory markings, knife-sharpeners … rock art – l'art rupestre – is so far beyond our traditional 'linguistic' history, it does not have an interpretative alphabet or a single line of confirmed meaning. There are many interpretations of the 'gravures' (carvings) and 'abris ornés' (decorated caves) in the hidden bivouacs throughout the forest of Fontainebleau. The sandstone marks easily under the nib of a hard flint from the deeper calcareous geology and this soft stone canvas has allowed our European ancestors to carve the stylised and modernistic strokes we might note as remarkable in a Picasso painting. Most of the carvings involve complex hash-marks and grids, overlaying each other, occasionally with mandala-like boxes. Sometimes there have been carved astonishingly beautiful anthropomorphs, (stylised human-like figures), or zoomorphs, (deities or humans manifesting in animal form) or argu
Location: Route de la Plaine Verte, 77300 Fontainebleau, France
Read more
More posts