Showing posts from July, 2019
Show All 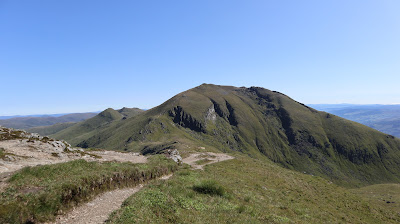 Ben Lawers: a montane habitat Ben Lawers is the parent peak of the Breadalbane mountain range, which stretches like a breaking wave in an east-west tumble between Loch Tay and Glen Lyon. Indeed, geologists often refer to the metamorphosed schistose mass as a vast 'recumbent fold' from the Caledonian Orogeny, a Highland mountain-building era of unimaginable slow-motion collision and uplift, between 490 and 390 million years ago. The rolling plateau landscape is now a long-eroded echo of this era when continents collided on an earth oblivious to conscious observation. Walking the rubbed-down ridges, it is easy to imagine you are walking the crumpled edge of a fold on the planet's discarded origami. The summit peak of Ben Lawers is a southern highland giant and the 11th highest peak in Britain. It has many subsidiary peaks on its long snaking ridge, from the south to north-east: Beinn Ghlas (1,103 m); Ben Lawers (1,214 m or 3,983 feet); Creag an Fhithich (1,047
Read more
More posts