Showing posts from March, 2009
Show All

March 30, 2009
Drilling a new sports crag, especially a steep one, is harder than doing the route itself sometimes, though it has its training benefits - holding a 6kg drill against a wall of rock leads to biceps like giant bubble wrap. I'd rented a drill for a weekend and with a good forecast was determined to drain the batteries and get as many holes in as possible. But I forgot the golden rule of bolting... take all your trad gear, I mean ALL of it! You tend to end up using so many clippers, krabs, bits of tat and old ropes that it turns into a full aid climbing expedition. I abbed down the wrong line first, didn't bring my shunt and had to do it all over again. Then I couldn't tension the old wall rope tight enough to pull in - it bellied out like an elastic band and left me spinning in the air, drill whirring round my kneecaps. At one point the sling slid over the drill trigger and it went for my kidneys, I screamed and pushed at the murderous thing like being attacked by a monster
Read more 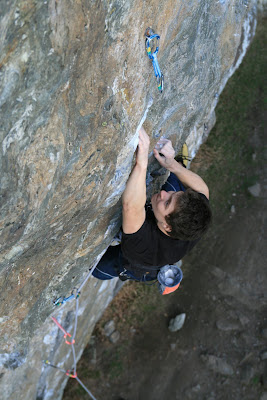 Nic Duboust on Marlena During a pumped lull in working the sports routes at Marlena , Mike disappeared off with his shoes in hand seeking something amenable to solo in the rhododendron wilderness. He appeared back an hour later with a 'pretty good' boulder problem project instead. Hard, he said. Okay, I thought, Cave Crag and its environs are not renowned for the generosity of bouldering, but what a little gem! Having eventually refound the problem, his radar having gone astray, Mike pointed out a beautifully scooped groove with two obvious holds on the right and none on the left, sloping ledges and a rounded top-out - the perfect boulder problem: not quite enough but maybe just enough. 'The Project' Numerous plays later he returned to the sports crag, still psyched but beaten for the day. Adrian Crofton, the bullshitting teuchtar , sent us off on a wild goose chase for a 'nice scooped boulder on a little meadow'. We found a chossy overhang on a bog. Meanw
Read more

Marlena - Anatomy of a Sports Climb 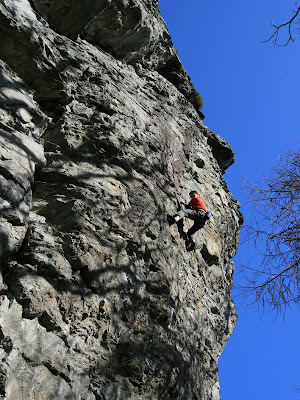 Adrian Crofton undressing Marlena, Cave Crag, Dunkeld It's been a few years since I had regularly climbed at Cave Crag, home to Scotland's best sports routes, though challenged a little by the emerging crags such as Goat Crag in the North West. Nevertheless, all the routes on this excellent schist wall still provide the benchmarks for early season fitness and a musical rosary of desire: Hamish Ted's, Marlena, Silk Teddies, Silk Purse, Ultima Necat.. Hamish Ted's, Marlena... Viewing the crag from Dunkeld on the first visit in spring, it always looks intimidating: a towering mass looming over Dunkeld - to me a grey-white page from the book of failed redpoints. So it was I returned midweek to my nemesis: ' Marlena ', as the warm spring winds and sun dried out the weeps. This route was originally climbed consecutively by Dave Cuthbertson and Murray Hamilton in late summer 1986, with nothing more than the odd bolt, pegs and wires for protection. Colin Lambt
Read more 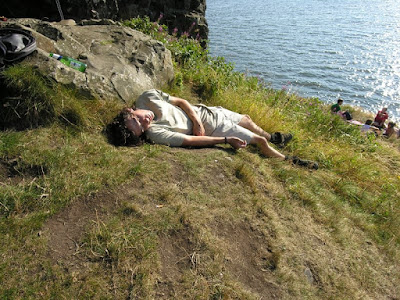 In a bid to liven up a new series of sport and bouldering guides, I'm looking for curious memories/histories of climbing at Scottish venues. They're just 100 word stories about humorous incidents or weird happenings, or memories of other climbers and people you met. I'm willing to give a page of each major venue in the guides to these snapshots with free copies of the guide to all those who are published, so treat it like a Cornflakes packet competition... in a hundred words or less...! Stories that are exclusive and haven't appeared elsewhere would be welcome, just keep it light and humorous, with a bit of local colour to highlight the mood of the venue. Dumbarton would be a good place, for example, as so much 'happens' there, but remote and obscure venues are fine, wherever your memory is stirred! The new guides should be publsihed in batches over the next year, covering all sporting venues and more comprehensive bouldering gen than is in the main guide 
Read more 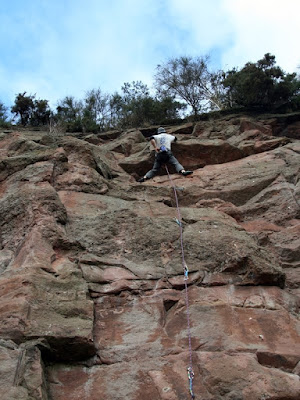 Fun early season sport at Kirriemuir This time of year naturally seems to see the most psyched and virulent spell of training, with the longer days stretching our anticipation and the usual eternal optimism of the Scottish climber that this year is going to be a blinder - better train for it! Getting up to speed with the sport climbing is the usual priority and in March the crowds descend on Hamish Ted's ... Is there a more popular sports climb in Scotland? I doubt it. Personally motivation to train means I have new things to go at. Plus a three week bout of flu and migraines have left me desperate to get out or at least to train with a view to these big stones and walls awaiting the sending winds and blue sky days. As an inveterate hunter of boulders, I have a few plums tucked away in some very obscure places, though some are not so remote and I pass on as many as I keep to myself... I'd rather see folk enjoying new rock where I know the climbing is beyond me. So watch out f
Read more
More posts