Showing posts from October, 2006
Show All 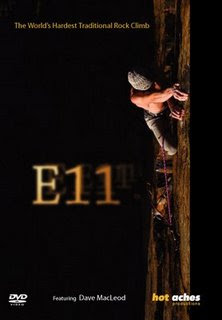 The 2006 Edinburgh Mountain Film Festival was packed and buzzing with anticipation, if not a little apprehension, after the bowel-loosening trailer for E11 came out some weeks ago. That pounding music, the slow-mo falls as they began... the sudden quickening wipe to the leg wrapping round the rope, the accelerating swing-in after 60 feet...crunch! I was wringing my hands as if I had turned up to watch a live car-crash. But my climbing lasciviousness was gradually eroded as Hotaches Productions pulled off a major feat in climbing film-making: a 'real film' about a climber's savagely withdrawn successes and crushing lows as Dave MacLeod attempted (over two years) to climb the awe-inspiring line of 'Rhapsody' at Dumbarton Rock. Paul Diffley has directed the film with feeling and pulled out some true performances from both Claire MacLeod and Dave MacLeod as the film delves into the personal traumas of obsession and the dangerous emotional tightrope of a climber maybe
Read more

October 04, 2006
It's that time of year when your bouldering soul aches for the sandstone of Fontainebleau! For those of you heading to Font for the autumn crispness, here's a little visual beta and inspiration - Chris Boutell cruising Le Toit de Cul du Chien Font 7a...
Read more