Showing posts from February, 2012
Show All

In search of The Murder Hole

On a round of the rigs of Galloway Forest Park, via The Merrick and the glacial lochs of Enoch and Neldricken, we were intrigued by an OS reference to 'The Murder Hole', marked as a water feature in blue by Loch Neldricken. This is possibly an anglicized term for a feature once known in Gaelic, for the area was originally colonised by the Irish Gaels, as suggested by the toponym of Galloway itself, named after the medieval Gaelic 'Gallgaidelib'  and referring to a 'land of the foreigners/Gaels' - 'Gall Ghaidhealaibh' in modern Gaelic. Gaelic for murderer is 'murtair', so an anglicization is easy if this was a pool renowned for murderous drowning, though it seems a long way to go to drown someone - the Buchan burn gorge is a lot more accessible! It was, however, picked up by the writer Samuel Rutherford Crockett as a setting for his novel 'The Raiders', in which The Murder Hole eponymises a chapter. 'I was carried among them
Read more 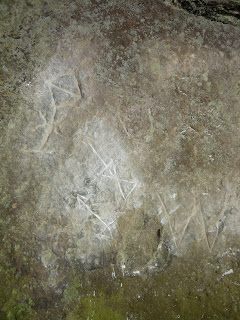 Took advantage of the high pressure drying out the gritty sandstone at Craigmaddie for a few hours bouldering before the skin could take no more. If anyone knows about Mason marks, have a look at the photo below and let me know what they mean. These marks are under the left sheep pen, next to (presumably) old quarriers' names 'A. Cairns' and 'J. Neilson'. I assume these guys, or colleagues, carved the mason marks onto the sheltered back walls of the caves, no doubt during long lunch breaks or wet days when they couldn't be bothered digging out the mill-stones.
Read more
More posts