In search of The Murder Hole

On a round of the rigs of Galloway Forest Park, via The Merrick and the glacial lochs of Enoch and Neldricken, we were intrigued by an OS reference to 'The Murder Hole', marked as a water feature in blue by Loch Neldricken. This is possibly an anglicized term for a feature once known in Gaelic, for the area was originally colonised by the Irish Gaels, as suggested by the toponym of Galloway itself, named after the medieval Gaelic 'Gallgaidelib' and referring to a 'land of the foreigners/Gaels' - 'Gall Ghaidhealaibh' in modern Gaelic. 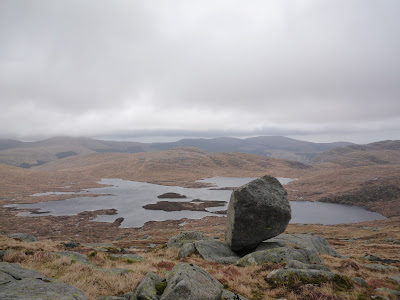 Gaelic for murderer is 'murtair', so an anglicization is easy if this was a pool renowned for murderous drowning, though it seems a long way to go to drown someone - the Buchan burn gorge is a lot more accessible! It was, however, picked up by the writer Samuel Rutherford Crockett as a setting for his novel 'The Raiders', in which The Murder Hole eponymises a chapter.


'I was carried among them, and there, not twenty yards before me, like a hideous black demon's eye looking up at me, lay the unplumbed depths of the Murder Hole...'

The watery hole that Samuel Crockett refers to in his adventure tale is indeed a looped bay of peaty, black water of no insignificant depth of around 105 ft (32 metres). This was measured by the hillwalker J.McBain, author of the 1929 book 'The Merrick and the Neighbouring Hills - Tramps by Hill, Stream and Loch', by the bold method of tiptoeing out onto winter ice, cutting a hole and dropping a plumb-line.

Murder is an integral theme of these hills. The name Buchan (as in Buchan Hill, Dungeon of Buchan, Buchan Burn etc.) refers to the Earl of Buchan -  a relative of John Comyn 'The Red', who was murdered by Robert Bruce on consecrated ground in a Dumfries chapel in 1306, as part of a long-running feud over rights to the crown between the Balliol-backed Comyns and the Bruce dynasty. Bruce's subsequent guerrilla war against Edward I and II included a victory at Glen Trool in 1307, and at nearby Claterringshaws, which set him on his way to the decisive battle at Bannockburn, 8 years later.

The naming of remote, moorland 'murder holes' (there are others in Galloway) is most likely a reference to murders perpetrated during the 'Killing Time' of the 1680s when Charles II and then James II brought murderous penalty to the cause of being a Covenanter and daring to interpret one's religion without a suitable intermediary (or spiritual landlord called a Bishop or Pope!). The religious persecution led to many high-profile deaths, but also many unrecorded but well-kent practices of murder in the Presbyterian south-west. Oral history relates tales of shepherds who would report finding murdered bodies on the moors, dumped in gullies or lochans or on the heather where they fell. 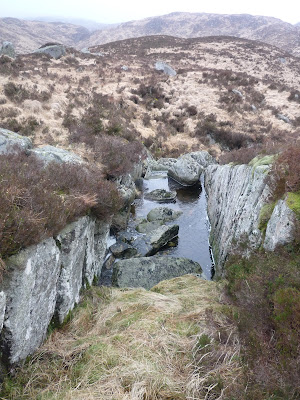 Which brings me to another possible toponymical interpretation of 'Murder Hole' and its actual physical feature in the landscape. Just above the entrance of the burn into Loch Neldricken, where the OS map notes the water feature of the Murder Hole, lies a distinct granite passageway (a geological fault) through which the burn pools and rumbles. You can stand on its edge and look down into its rocky throat and imagine it as a perfect 'murder hole' into which bodies could be dumped. Medieval castles often had a narrow passageway built leading to the main gate, with windows above known as 'murder holes', through which to fire arrows or pour pitch onto unsuspecting, or simply unfortunate, soldiers. So is this feature the original 'murder hole', before Crockett misinterpreted and fictionalized the deep pool of murder nearby?