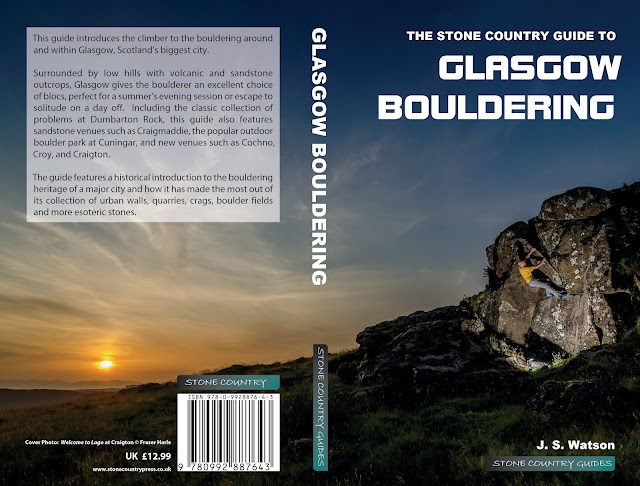 With the new guide to Glasgow Bouldering forthcoming, and with the last two years spent scouring our local landscapes for vertical diversion, many of us discovered a closer, more nuanced appreciation of climbing and how it helps maintain mental wellbeing as much as physical. The big mountains and wilderness landscapes were for the first time excluded from access and our pandemic taught us all to appreciate the landscapes on our doorstep. Even the urban world has its own small wildernesses and landscapes to immerse ourselves in for a while. For me, the daily walk in lockdown occasionally became a hunt for an esoteric piece of rock spied on the OS map or Google Earth. Rumours of boulders and mythologies of obscure rock were hunted down to help feed a hunger for the vertical.

Even Dumbarton Rock was out of range, lying outside of the Glasgow City boundary. It's a venue which famously makes the blood run cold, with fiercely exposed overhanging routes, highball boulder problems and classic 'wobblers'. It has a well-documented sporting heritage and its geology is planar and rigid, demanding high pressures, an almost mechanical level of precision, as well as subtlety and beauty of design (a kind of Glasgow art-deco curl of movement over geometry). But I was glad to leave the physical scale and presence of Dumby for another time. The last two years inevitably led me, a Glasgow citizen, to the idea of creating the Glasgow Bouldering guide, as I soon realised there was so much more than Dumby. Dumby was going nowhere fast, so I looked to climbing friends and old guidebooks for hints to where we might find our next bouldering fix.

In the middle of Paisley, for example, in a scruffy urban park, amongst burnt stands of gorse and an archaeology of all sorts of litter, Joe Kelly reported that a sandstone boulder could be found behind Aldi in Charleston Park. I thought this was a good old-fashioned prank at first, but on the first lifting of 'Lockdown 1', I was surprised to find this steep roof outcropping in the most unlikely of spots. A geological perch for local Friday night socialites, a horn of rock on its north side, and a steep undercut wall to the south, it provided some technical and grippy diversions in the vertical. The obligatory and almost ritualistic clearing of glass litter, cans, and detritus under the plinth made me realise how bouldering can amplify the voiceless presence of a geological memory. The 'Andromeda Stane', as it has become known to the climbing fraternity, is unnamed on the map, probably called something else entirely by locals, but has gained a small corner of mythology in my rocky mind-map of the Glasgow bouldering landscape.

South of the Clyde, outdoor bouldering had been saved by the artificial park at Cuningar Loop in Dalmarnock, a former waste-ground transformed into an urban forest park in a loop of the River Clyde. It features nine resin/concrete boulders designed with a nod to the shapely blocs in  Fontainebleau, and was funded by the 2014 Commonwealth Games legacy project. The detraction of them being 'artificial' soon dissolved as lockdown contained us all to a narrower circle and climbing on them made me focus on pure movement, immersion and pleasurable forgetfulness of the difference between the 'real' and the 'artificial'. Climbing is climbing, and in a few years the park now has various circuits of problems ranging from the easy to 7a test pieces.

Other mythical rumours led me to revisit an old quarry on the banks of the White Cart, a mile or two south of the Court Knowe quarry above Linn  park (another good local venue seeing some renewed attention, such as the Ten Year Wall and the test piece of There Is No Spoon from 1999). The roofed quarry wall in a bend of the River Cart below Busby (an old lignite extraction site), was always blank, viciously overhanging and devoid of holds, but was chipped years ago to provide some climbing, a bit like the European fashion for doing so on steep rocks (the Sasso Remenno in Val di Mello, or even the famous example of  the Toit du Cul de Chien in Fontainebleau, with its crux drilled pocket). This secretive and obscure setting amongst the wilderness of Castlemilk Woodlands gave me a meditative spot to escape lockdown and pull some moves in vertical space.

Craigmore, to the north of the city, has always been a quiet and secluded spot for bouldering. The routes are good too, but the bouldering has always been under-rated, with a good circuit of around twenty classic problems in the lower grades, with a few test pieces up to 7b+. Its rediscovery in recent years has led to an unearthing of old classics as much as developing the never-ending story of 'eliminates' and 'link-ups' to keep the boulderer interested. Perhaps the classic problem here is The Wizard (video here >>>) a righteously five-star highball 6b.

Perhaps the best example of this bouldering revisionism is Craigton, which will feature in the new guide. A long-forgotten venue of basalt pinnacles and walls, this was rediscovered by Fraser Harle and friends in 2019 and 2020, Fraser cleaning and brushing the blocs down to their blond basalt cores, revealing a quality of rock and movement that had largely lain dormant since John MacKenzie had climbed here in the early 1970s. Since then, only two climbers had thought to look here for bouldering: Andy Gallagher and Darren Stevenson climbing the hard technical pillar of Far From the Maddening Crowd (7c) in the late 90s. Now, thanks to a year or two of lockdown-focus, this venue has over a hundred problems with a range of classic circuit problems between 4 and 6c, and a range of test pieces on smooth, slopey rock up to 7c.

Another largely undocumented venue was Craigmaddie Muir, a sandstone venue north of Milngavie, which for years was a quiet secret of a few Glasgow boulderers, but has now become a mecca for those who like steep sandstone roofs and technical lip traverses. It will feature in the new guide, with a comprehensive account of all the bouldering there.

Glasgow, as an urban centre, seemed in the early months of 2020 to have become a prison for climbers excluded from access to indoor walls and the painfully-visible Highlands. I discovered that there were inner wildernesses to be explored, and the Glasgow Bouldering guide is dedicated to all those climbers who transformed their limitations into opportunity, and lockdown into release.