Once you cross the bealach under Beinn Odhar north of Tyndrum, the shapely peak of Beinn Dòrain is a visual fanfare to the Highlands. The mountain and its environs are richly detailed in the poet Duncan Ban MacIntyre’s poem Moladh Beinn Dòbhrain (‘In Praise of Beinn Dòrain’).[i] Its symmetrical convexity, deeply gullied flanks like pencil sketch-marks, and stern domed summit, make this a moment to instinctively reach for the camera. It is a steep but invigorating mountain to walk, which is more leisurely explored from its eastern corries, though the traditional ascent from Bridge of Orchy, up to the toothed ‘Am Fiachlach’ ridge quickly brings fine views from the heart of the Central Highlands, encompassing Cruachan in the west to Lawers in the east and the Mamores to the north. 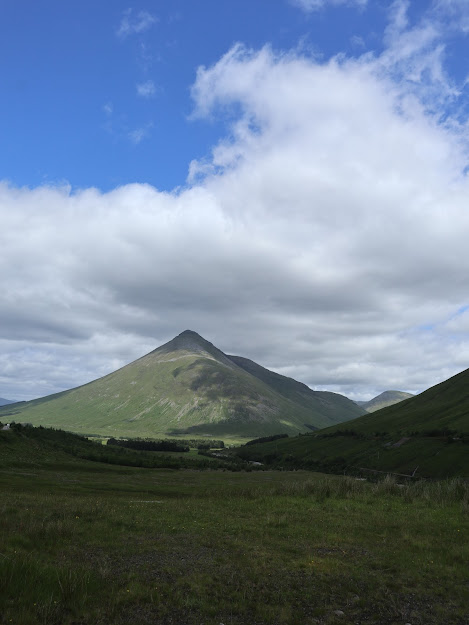 If you were set the task to name the features and character of this mountain, before a Gaelic toponymy, you may have come up with a similar vocabulary. Like the poem, the mountain is a multi-sensual experience: smell, sound, vista, sound, and even taste invest the mountain with a completeness which so affected Duncan Ban. Walking the mountain in an anti-clockwise circuit gives time to acclimatise to the character of the glens before you tackle the hill. The descent from the road past the Auch Estate lodge leads through the cattle-churned fields beside the alluvial clarity of the Allt Coire Chailein where it joins the Allt Kinglass. The estate track leads north-east deep into the ‘Glen of the Island Fields of the Girls’, under the railway viaduct, where low fields are threaded by the low clear waters which occasionally bifurcate and create pools for the cattle and deer to wallow in. Shelter stones and ‘Big Peter’s Stool’ are passed (large erratics on the northern slopes of Beinn a’ Chaisteal). Light streams down from the east through heavy July weather, creating those finger-rayed illuminations on the river which turns everything high contrast through a moody filter of sun and cloud.

The old burial ground and chapel site sits by the bubbling stream. Ovals of whitened schist stones enclose unmarked graves and walls, covered in a silencing greensward of rich grasses, the odd rowan standing vigil. The stream here is called the ‘Allt na h’ Annait’. Annait is a peculiar word in Gaelic, seemingly referring to a chapel or religious site around a village, and in the older 1843-1880 OS maps, there is a chapel ruin marked by the stream base before it enters the main glen. No-one is here now, the glen is empty most of the year, aside from nomadic deerstalkers, walkers and cyclists. Looking around the old grave and vague ruins, perhaps this deep glen once housed an early Christian settlement, it is certainly a rich and pleasant place in summer, green with narrow fertile ground, now dominated by a strip of monoculture spruce plantation. Further along the glen, a pagan influence is suggested by the naming of the hillocks further east as Sithean Mòr and Sithean Beag (Big and Small ‘Hill of the Faeries’). 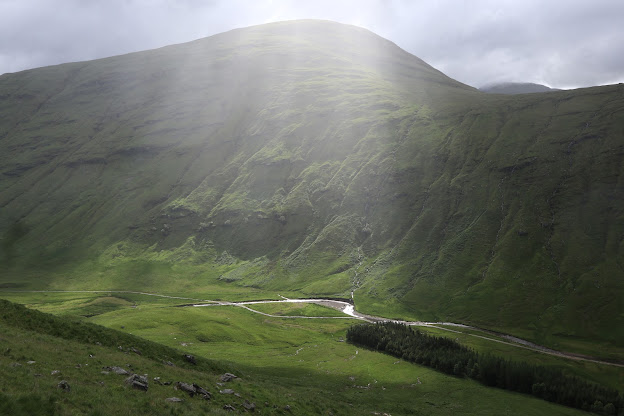 I climb sharply up the Allt na h’ Annait past its locally deafening falls. Yellow mountain saxifrage (‘yellow rock-breaker’) huddles in the stones amongst the dwarf willow and twisted rowan. A sharp sound penetrates the roar of waters. I triangulate my senses to the triple-piping of the Common Sandpiper. It is bobbing almost invisibly on a stand of stones and feinting me away from its gravel nest on a raised island in the stream. I leave it be and continue the hike up to the Sròn Garbh (‘rough nose’) under Meall Garbh. Traversing this left under increasing crags, I hear my first raven honking at me and skirting the updrafts. The mist still dominates the summits but begins to clear as I skirt west into Coire Chruitein. This is where the sound theme continues. This amphitheatre of rock pinnacles, walls, gullies and crags, echoes the ‘harp’ from which it is named. Higher up, the deeply cleft stacks and crags of the Feadan Garbh (‘rough chanters’) echo to the call of the raven family. I have been here in winter when the wind howls and moans through the gaps, this keening musicality has been noted by Peter Drummond (Scottish Hill and Mountain Names) as possibly the best etymology for the mountain. ‘Dòrain’ has variously been translated as ‘otters’, ‘streamlets’, or ‘anguish’ (‘keening’ in Scots), and whilst there may have been the odd otter, and the steep tumbling streams are loud and distinct, the sound of this mountain (which has been noted to ‘sing’ in the night during a storm) feels the most accurate. I can imagine the dwellers amongst the Annait turning to listen to the hill when it blew through the rocky pipes and harp strings of the corries during a storm.

The steep, trackless eastern gully of Coire Chruitein is full of monolithic boulders and braided streamlets, rich and deep with mats of alpine plants: mossy saxifrage, yellow saxifrage, parsley fern, roseroot, speedwell, tormentil, mosses, liverworts, Alchemilla alpine (the ‘little alpine alchemist’ or Alpine Lady’s-mantle). The way steepens amongst the sodden slopes and the wind moans a little amongst the crags and sends the last of the mist away as the July sun breaks through. Distinctive chunks of snow-white quartz appear amongst the greenery and suddenly the crest is gained and the view opens to the west and north. Back on the path, it is a short hike to the southern summit at 1076m, marked by another lump of quartz. To the west, the quartz vein of Beinn Udlaidh is clearly seen, and the lines of humanity are clear from this height: the squiggly access roads of cleared spruce-plantations, like snail trail;, the ‘horseshoe’ viaduct of the railway; the tan contour of the West Highland way; the A82 barreling along the glen in an echo of its old military purpose and incursion.

Summits are always moments of anti-climax, the camera takes a few panoramas, which are never satisfactory, and the sense of ‘surround’ is gone. A raven recalls the vitality of high air, so I stop for a while to eat a banana and rehydrate and simply enjoy the abstracted views of being ‘above’. A lone figure below picks his way amongst the southern crags and alps on his way to the summit, patient, deliberate. I decide to pick my way down the steep stone-slips and grass alps of the southern slopes. I listen for the tell-tale clinks of Ring Ouzel, or the mewings of Golden Plover, familiars to such habitat, but hear none and continue a descent to the wide grassy alp where the sheep have climbed to feast on rich summer grasses and herbs, obeying their own instinctive ‘transhumance’ to higher ground.

Just to the west of this comfortable meadow, with its flat flagstones tempting a nap, begin the precipitous gullies so clearly seen from the roadside, and at this angle dangerously craggy. I seek out the cressy green patches of the Fuaran Mor (big spring), bubbling out of the mountain, drinking from the source at 700m. The water is still and sweet and cold, and bits of mineral grit stick in my teeth. I crunch them pleasurably, swallow and move on down the hill. This is slow-going but allows time to stop and admire the budding bell-heather, the spikes of yellow asphodel and leaping waxy-brown frogs, alarmed by the sudden intrusion of walking poles. A two-carriage Scotrail train sounds its horn over the viaduct and rattles past. I duck under a sheep culvert and am most decidedly amongst the tracks and ways again.

[i] Donnchadh Bàn Mac an t-Saoir, Moladh Beinn Dòbhrain. A new ‘polyphonic’ translation of this by Garry MacKenzie is available in Kathleen Jamie’s collection Antlersof Water: Writing on the Nature and Environment of Scotland (Canongate, 2020).