Bourblaige and the Landscape of Outrage


Landscape is a notoriously slippery thing to capture. It seems simple enough and is usually framed with the romantic grammar of dramatic vistas, through photography, painting and film. The modern thrill is delivered by drone's-eye view as you whir smoothly through mist and cloud over a Highland loch or corrie, when you might feel the similar emotional rapture of Edwin Landseer, Horatio McCulloch or the early photographers such as Robert Moyes Adam and Frank S. Smythe. This visual drama of the Highlands as natural wilderness and freedom from human influence is a view which has been painstakingly constructed over centuries, but it means little if you were to ask what is valued, and the landscape seems more fragile if you do. Emigrants to Canada would clutch sods of turf to their chest, taking a little bit of home to lay on their new burial grounds. Clearance victims would carry a particular stone or wooden beam from their ruined homes, and an oral history of abuse and outrage. Landscape is not mobile and yet we hang on to its pieces, and it is felt most keenly when it is disrupted, razed, or when we are excluded.

Guidebook writers have tried distractedly to summarise Scotland and its landscape, finding it hard to crystallise its meaning other than through visual variety of notable features. Hugh Quigley, who wrote on the Highlands of Scotland for the Batsford 'Face of Britain' series, 1936, says tellingly in his introduction: 'How is one to approach the Highland landscape without prejudice or predilection? The mind does not take an impartial view of anything: it mixes reality with association, and sometimes association is the more important.'

The answer is you can't. Understanding a landscape has to involve a conflation of personal resonance, repeated details of engagement, and not some abstract itemisation or audit. History and knowledge are also required, as stock colours on the palette, but the impression is not complete without the emotional hues donated by the imagination. I was aware of how unreconciled any landscape perspective can be on a visit to the 'clearance village' (now a common term of reference) of Bourblaige on the Ardnamurchan peninsula. This collection of ruined steadings sits in a sward of hillocky land under Ben Hiant. Its old ecology of enclosed field systems is now being overtaken by creeping peat-bog and is grazed by red deer which meander and bound between the walls. The houses nestle around the confluence of three burns falling from the steep south-eastern slopes of Ben Hiant. The water is clear and rills deep in the turf and down a steepening gorge filled with rowan, alder, aspen, willow and oak. There is no-one here. Wandering amongst the ruined houses, the stones interpret their own mute testimony. 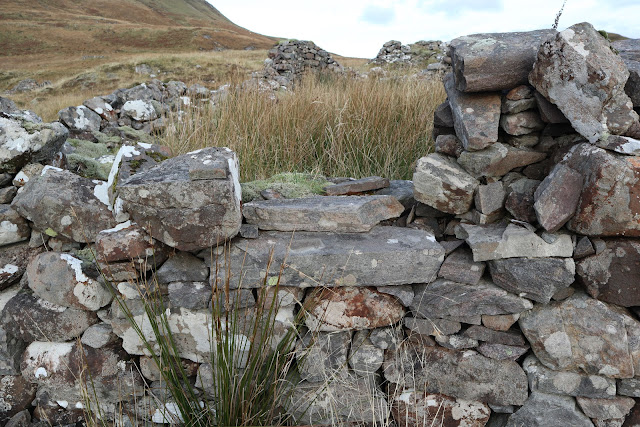 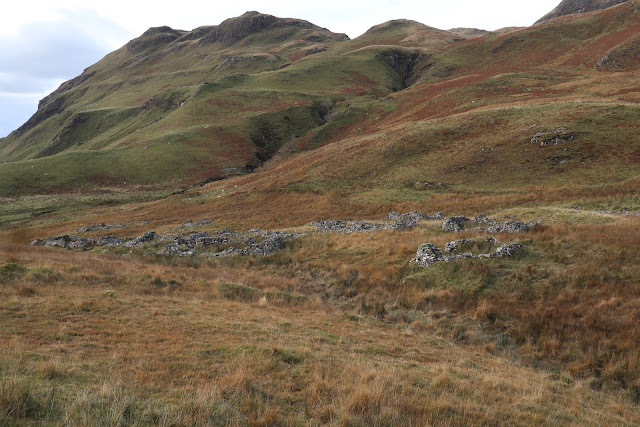 Once this land would have been well-tended, with an enclosed 'in-bye' system of Runrig fields and the busy husbandry of land and animal. I was on my way elsewhere but was waylaid by the sounds of a community without its people: running streams, wind in the aspens, the flinty scrape of loose stones on the gable ends. I was humbled imagining the long lives which were lived here, the sense of embeddedness with the landscape, that built-in affinity that exists out of range of visitation. The community here and at nearby Camas nan Geall, Tornamona, Bourblaige, Skinnid and Choiremhuilinn was evicted, under the advice of accountants who thought sheep-farming and eviction of rent-arreared tenants the perfect remedy to save the Highlands. The overseer was a bankrupt Sir James Riddell (2nd Baronet of Ardnamurchan). The first three of these townships were amalgamated and leased to the factor John MacColl, who was directly responsible for the cruel evictions of 1828:

' ... attended with many acts of heartless cruelty on the part of the laird’s representatives. In one case a half-witted woman who flatly refused to flit, was locked up in her cottage, the door being barricaded on the outside by mason-work. She was visited every morning to see if she had arrived at a tractable frame of mind, but for days she held out. It was not until her slender store of food was exhausted that she ceased to argue with the inevitable and decided to capitulate.” Another observer recorded that, “To clear Bourblaige, the laird’s men shot the dogs, and they shot the goats, and they drove away the cows. And then they took the roofs off. It was in the wintertime that they did it. Ploughs were put through the potato pits so that they would spoil in the frost. And the people walked to Swordle [on the north coast] through showers of snow."'

This inhuman economic philosophy, mediated at many levels and impervious to culpability, led to hundreds of townships being cleared throughout Scotland in the 18th and 19th centuries. The landscapes are now largely barren of human influence other than the sheep-farmer, who needs rarely be present. At Bourblaige, the sheep roam high on Ben Hiant, on the old common grazing. The only other curator is the archaeologist, who has sealed the township in time as a symbol of 'clearance architecture'. How would you paint such a landscape now, with this knowledge? It is permanently stuck between two times, frozen in separated centuries and gapped by generations which can no longer speak directly. Genealogy may lead some here and their ancestral connections may feel pained by the imbalanced dichotomy of preservation and neglect.  Reconstructive topos and paintings on the interpretation panel give good information and point the way, and allow the visitor the opportunity to imagine their own idea of how hard (and only sometime idyllic) life may have been.


CHARTERED ACCOUNTANTS AND THE HIGHLAND CLEARANCES
DURING THE MID-NINETEENTH CENTURY, Stephen P. Walker, University of Edinburgh, 2001