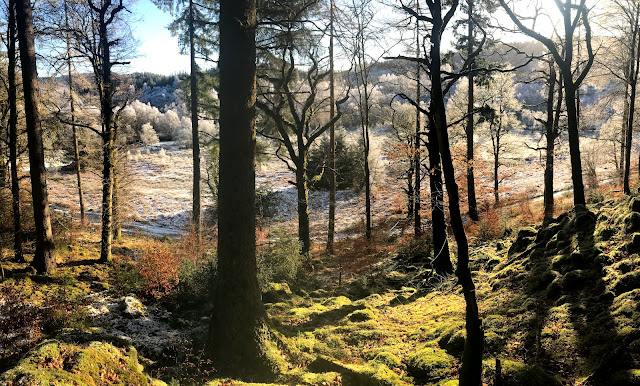 The boulders sit on a small wooded alp under the crag overlooking the Achray Water sliding by below, a ribbon of invisible clarity full of spring's snow-melt. It's early April in Scotland. A dipper's song rings out as it scouts downstream, a metallic squirt of noise like a kid's water-pistol. It's a religiously regular little corner of the bouldering world for me. The big beech tree beside the boulders is still in penitential winter garb, its bare limbs pale and its buds still tight-lipped whorls reluctant to sing any green matins just yet. Wild goats and their kids meander out of the forest onto the road, crossing the bridge in a slow pilgrimage, stopping traffic.

I sit on the mat feeling the familiar hot-ache tingle from the cold morning rock, my tendons tuning up and vibrating in their parcels of flesh. Bouldering can feel very organic at times. Especially in solitude when you're working a problem or two: the adrenaline pump of a sudden tumble onto the mat; the gradual erosion of skin on the rough schist rock; the feeling of the body warming up to its capacity like an old engine full of valves and pumps.

No matter the capacity of that engine, paying attention to the small details of reward is the key to bouldery enlightenment. The stations of attempting any problem are like abandoned prayers, like a hungover monk stumbling half way through a well-known psalm, forgetting it completely, then trying again from the top. But for the climber it's a bodily, embedded prayer, a much more secular thing of matching the pitch of the stone, recalling its geological lyrics. The hidden notes in the stone. I stop between attempts, deliberately resting and recruiting muscle strength for another go, gradually getting closer to linking the whole sequence, just eight hand moves, to the top of the boulder. It may be a small world but it is a big space for a lot to go awry: not twisting the hip enough here; missing the hold's alignment by a pinkie; letting the swing take your feet off ... dropping onto the mat, smacking the chalk ball to the ground in frustration. It rolls off down a muddy slope in revenge.

Then it begins to arrive: the full absorption, the dissolution. The natural world drifts away and the mind conjoins with what the body is thinking, leaving a blank like an interference pattern on a pond. Much as surfers talk about catching a wave, you catch things just right and at the right moments, swimming upwards with the required ergonomics, and the problem is 'sent'. Which sometimes feels like the right word as it is gone from you again, like a letter to an unknown address, unreclaimable, in another's hands. You write another letter, with the same result, but perhaps with not quite the same words. The skin is gone now, slipping off the quartz, not biting, and it's time to fold the mat, pack the kit and let the world in again.

I walk down to the river mouth at the lochside, to dip my stinging fingers in the cold waters. A gull cruises over a gravel bank, suddenly dips and picks up what looks like a dead frog. The bird carries the amphibious little body away to the skies, the frog's long legs dangling uselessly, its arms outstretched in the gull's webbed grip. An aerial crucifixion comedy. The gull drops the frog and a screaming mass of other gulls descend on the oblivious bounty. I shake my head with pity. Religious themes seem to abound today: the endless sacrifice of the body, the way of the world - life and death in discreet places. Spring, again ...