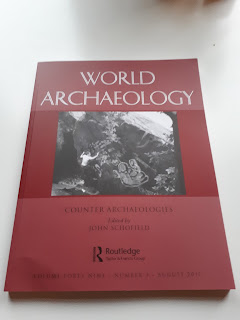 Bouldering might feel just appear to be just a bit of athletic fun on some rock, but some take it very seriously indeed ... even archaeologists. The latest issue of the academic journal 'World Archaeology' features an article on the idea of 'counter archaeology', as practised by boulderers at Dumbarton Rock (amongst other visitors such as graffiti taggers/artists). It's always worthwhile taking some reflective time to consider what our activities mean in the greater scheme of things, and how they might appear to someone who has never witnessed this activity. In more imaginative contexts, some might see bouldering as 'costly signalling behaviour' (showing off), or consider it a pure form of non-representational theory (talk to John Hutchinson), and some might just call it 'bonsai mountaineering' (my term). Anyway, it was all a collective effort instigated by some kind archaeologists at ACCORD, an enlightened group of enthusiastic people who believe in opening archaeology to everyone... check out some of their projects at this open access site >>> which includes a 3D model of the Pongo boulder.


Here's the abstract: ' The notion of counter-archaeology is echoed by the opposing faces of the volcanic plug of Dumbarton Rock, Scotland. On the one side is the ‘official’ heritage of Dumbarton Castle, with its upstanding seventeenth-century military remains and underlying occupation evidence dating back to at least the eighth century ad. On the other side lies a landscape of climbing, bouldering and post-industrial abandonment. This paper develops counter-archaeology through the climbing traditions and boulder problems at Dumbarton Rock and brings to the surface marginalized forms of heritage. Climbers and archaeologists have co-authored the paper as part of a collaborative project, which challenges the binary trope of researcher and researched and provides a model for a collaborative, co-designed and co-produced counter-archaeology.'