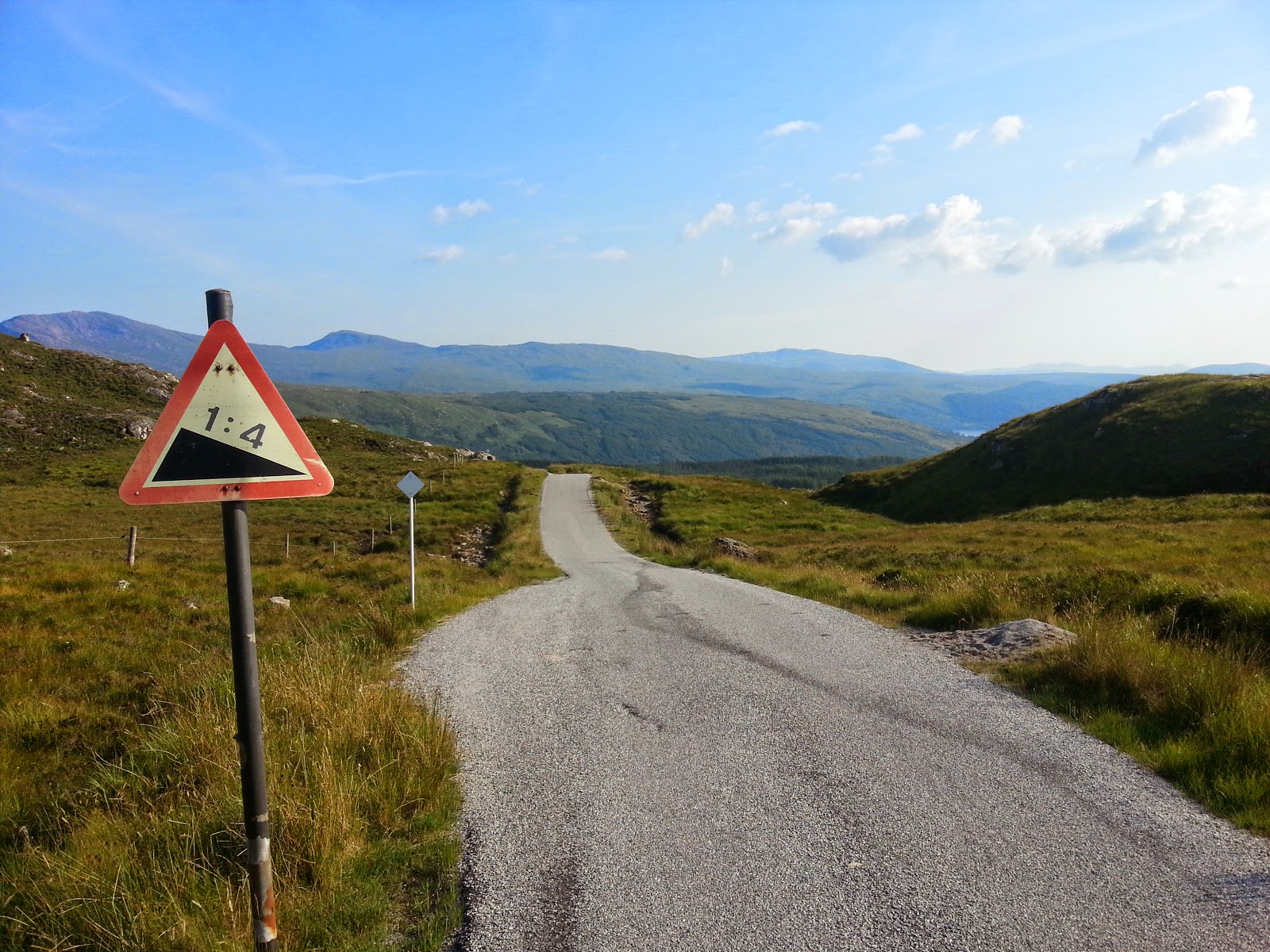 First of all, having a couple of 'refreshing pints' in the Strontian Inn was a bad idea . . . the hottest day of the year at the fag-end of July, the tarmac bubbling, it seemed wise at the time. The Bealach Feith Nan Laogh could wait a bit. I checked the specs of the climb, which seemed less electrically-shocking at a pub picnic table in the sun: 2.6 km with an average gradient of 11.8% . . .  steep, but no killer, I reasoned. Something at the back of my head crawled and writhed, trying to fathom what higher gradient would average it to 11.8! I clipped into the bike and set off, my mind a fuzzy blank of summer bliss. 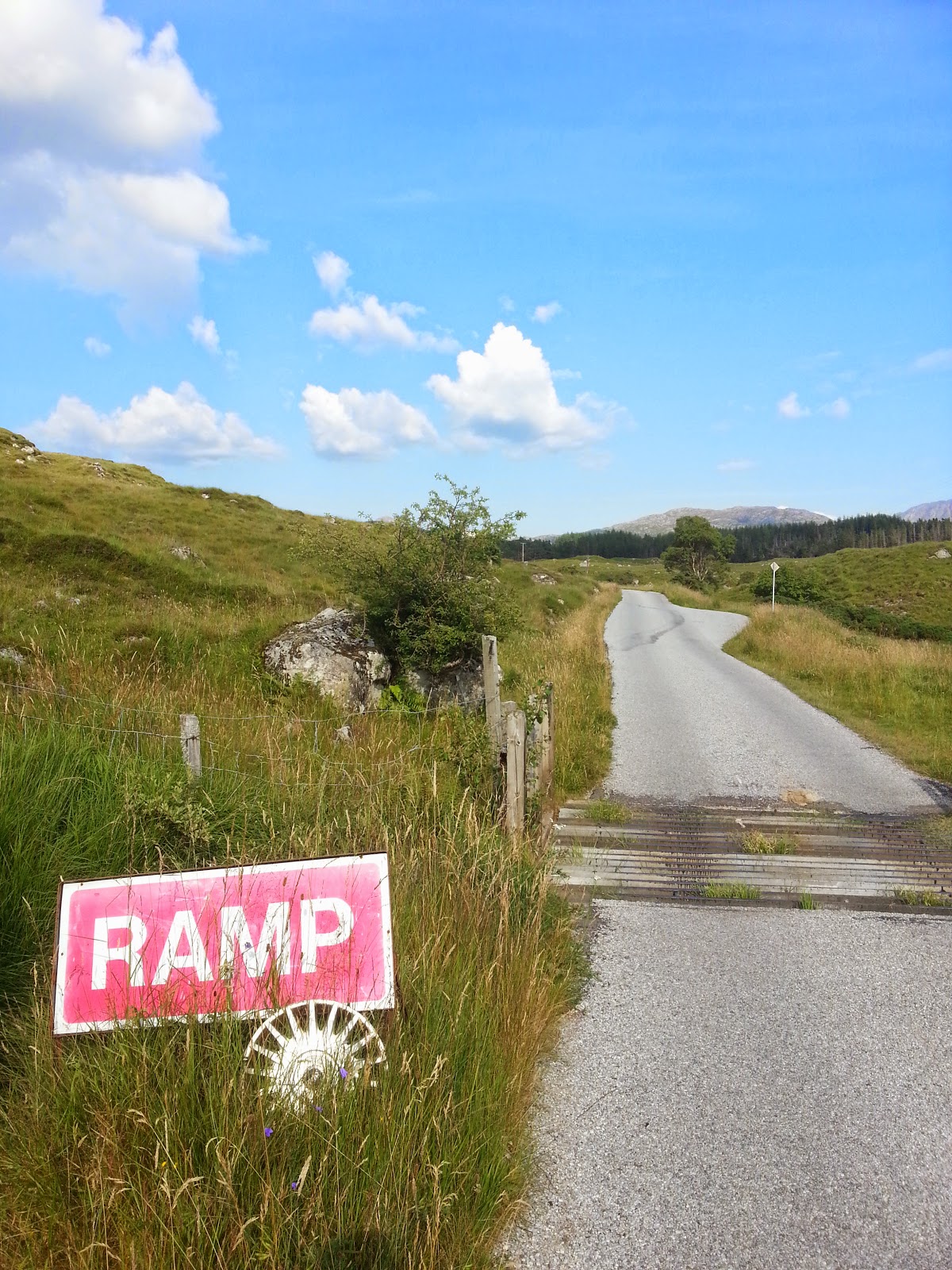 Turning north off the main road at Strontian towards innocuous-looking hills, the wooded first few kilometres are flat and surfaced with new rolling tarmac, I was in a pleasant dream of cycling paradise, spinning without a chain, listening to birdsong, still on the big ring. A small sign turned me left up a short wooded hill towards 'Pollochro 8m'. Not far really . . .  I knew the climb began shortly but the small ramps weren't difficult and I was still outstripping the chasing horse-flies until a sign above a lost hub-cap said 'RAMP' in big capitals on a red background. The road didn't seem that steep, I was still spinning off the beers, marveling at the rock-garden scenery. Things focused down to the width of my front tyre as I got out of the saddle at Belgrove House and dropped to the wee ring to turn some sharp corners through the old pines. No biggie. 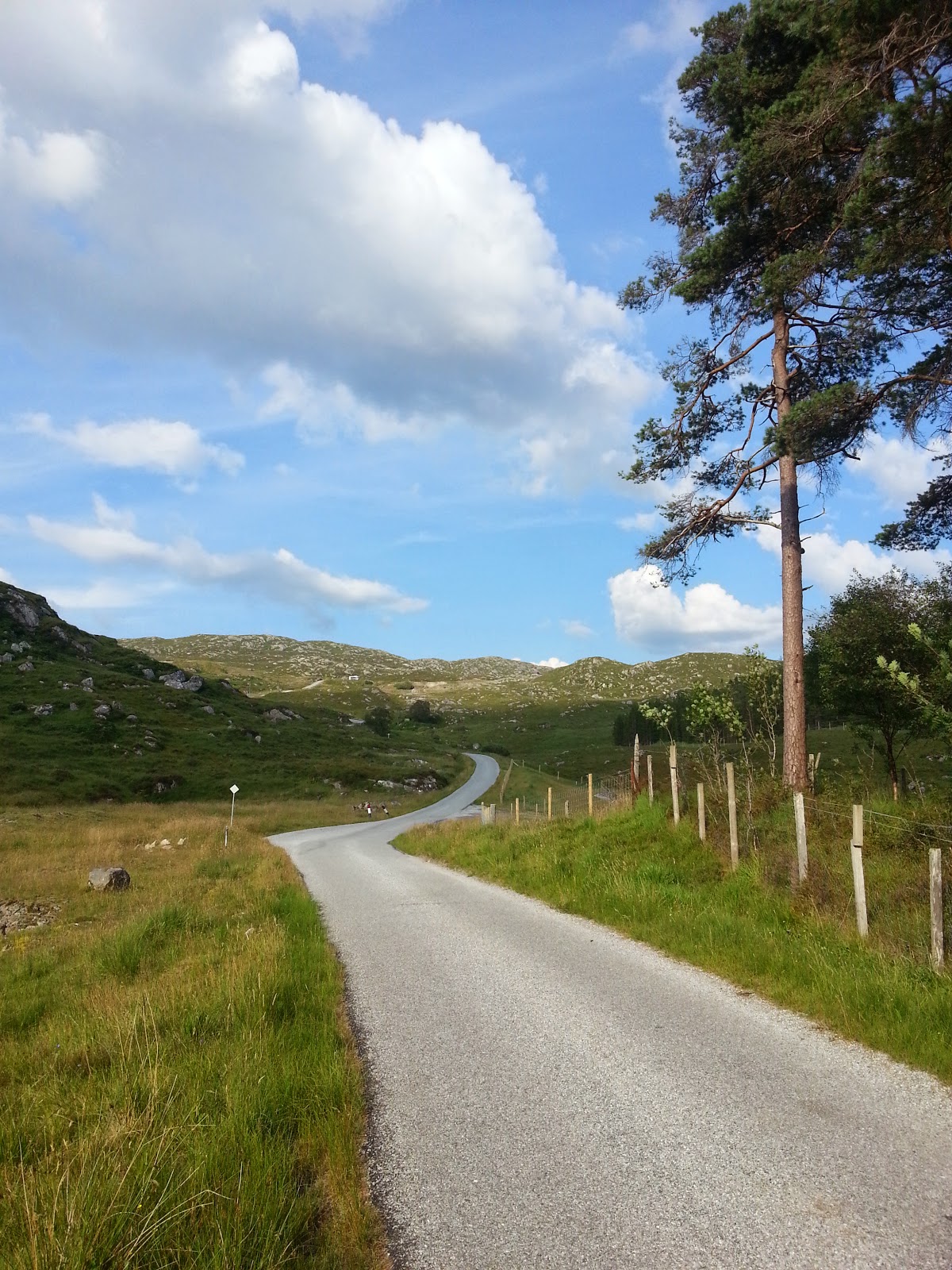 Then the vista suddenly opened up and I looked uphill to a shocking sight. The strip of gravelly tarmac took off up a hill that seemed to be a painted grey vertical line on a green background, a Rothko painting on its side. Half way up the hill, a camper van and two chairs sat perched precariously on a rocky ledge of a layby, looking out over Loch Sunart and the punishing evening sun. I endured a mild gut panic, there was an audience, and the beer was making me feel suddenly queazy rather than refreshed. Oh well, down to the second-last gear, out of the saddle. I passed the run-off for the old lead mines, clunking up to the big  ring's last-chance-saloon, grinding at just above fall-off pace, trying not to go into the red. Jeez, this was steep. Just 50m or so to the camper-van, then I'd be okay, it flattened there, I said to myself.

The people in the deck-chairs watched me like an old curious tractor from the 60s, going to an agricultural fair. Not far off. I passed them and gasped a greeting, more like a plea for help. The horse-flies had found me, mocking my pace, so I spun a bit and went into the red, rounding a corner to a sudden and sickening rise in gradient to a hairpin. Jeez, that must be 25% I thought! I ground up it, heart racing to the max, sweat washing my eyes with battery acid. I rounded the corner and another rise of the same punched me in the gut and I unclipped, steeping a foot to the ground just to catch my breath. Hell! I wheezed for a minute, eyes full of tarmac, then turned and rolled down to a layby, reclipping, turned again tightly and ran at the beast this time, grinding out the switchbacks and trying not to spin in the melted tarmac and gravel. If I didn't dig a little deeper, I would end up a tarred and Ruskolined mess on the Bealach Feith nan Laogh. 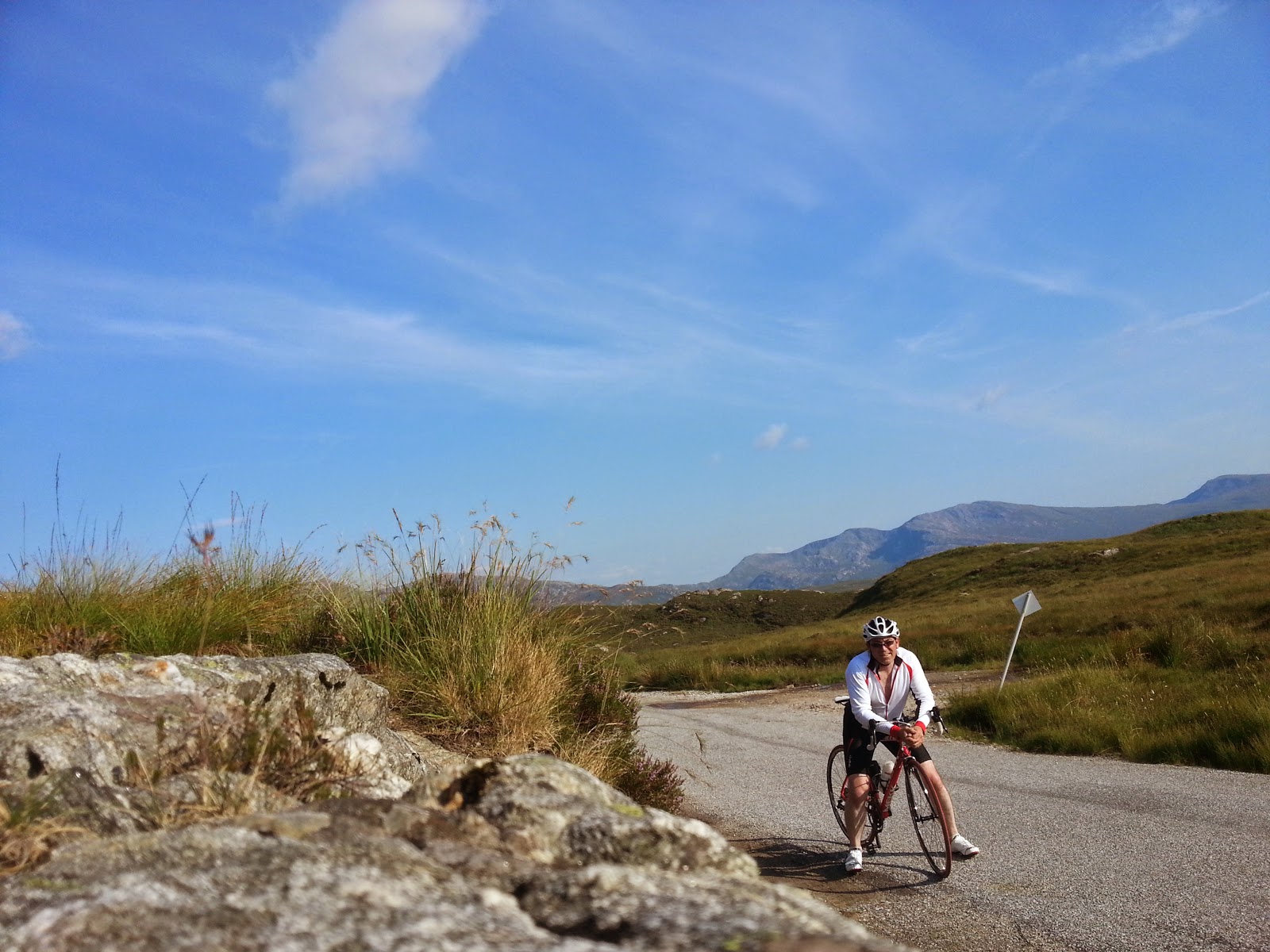 The road finally straightened a little but continued to rise at a punishing gradient, bellying up through the rocks and whispering grass towards what looked like a mobile mast - perhaps the pass, a sign of the end to this punishment? It ended thus, hung over the handlebars beside an old gas storage tank, it was full, I was empty.

I've never burned off two beers quite as quickly in my life. 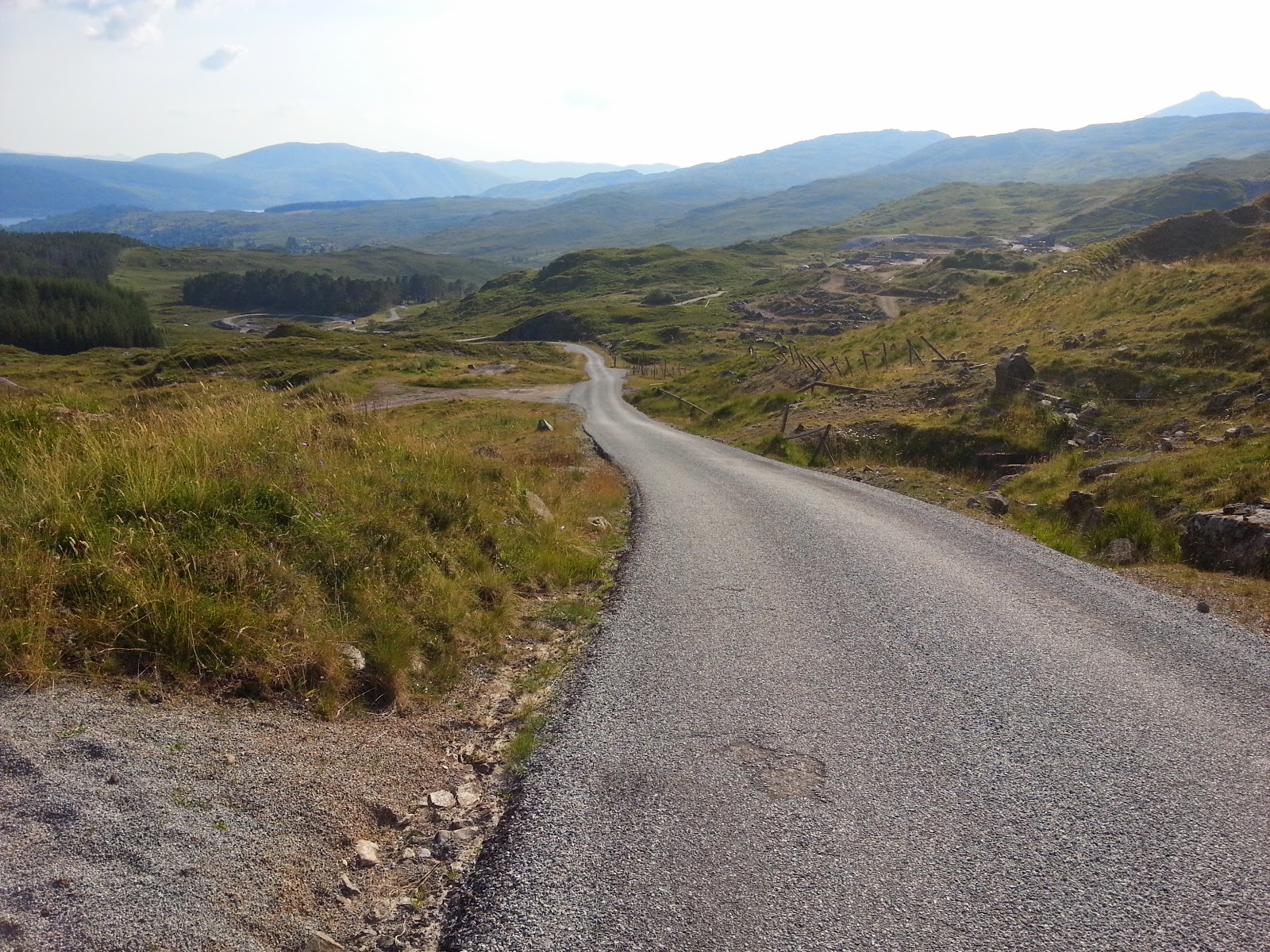