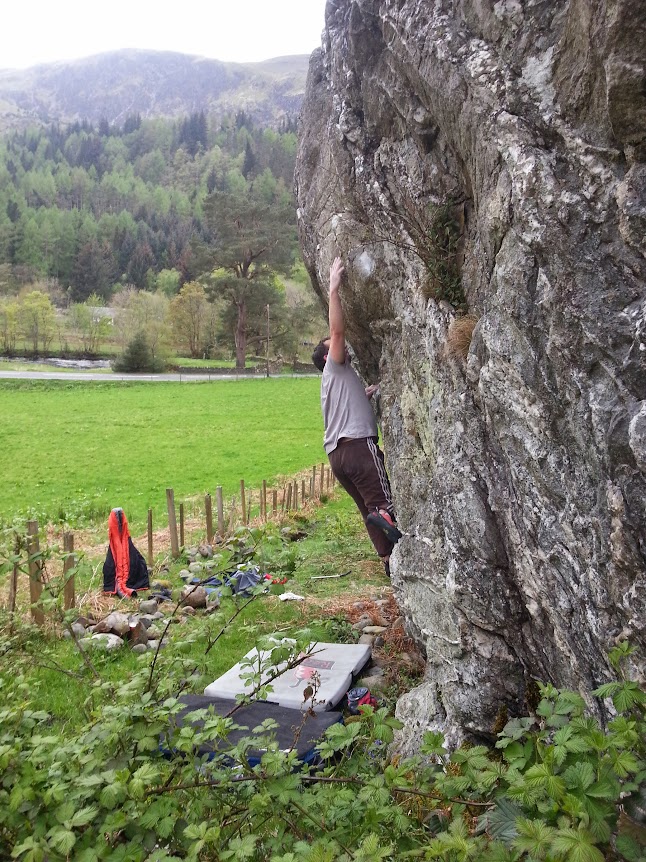 This quartz-veined schist wave of rock is a south-facing glacial crag easily spotted in a field on the A84, opposite St Bride’s Chapel and graveyard, a few kilometres north of Callander as it passes along the Garbh Uisge’s ‘Falls of Leny’ and the south end of Loch Lubnaig. It is easily accessible from a straight-road layby south of the chapel, cross the road (carefully, as traffic is fast), walk north and enter a field to walk over to the crag - two minutes.


The bulging crag has a number of short traditional routes surmounting the ramp onto slabs, such as the flake crack Bride’s Crack (HVS) on the right, but below the distinctive rising ramp feature is a steep wall with increasingly hard and higher problems from left to right. The wall has been bouldered on only sporadically since the 70s, so names and grades are speculative and first ascents are murky. Angus Clark and John Watson repeated the obvious problems in 2007 and 2008 respectively, possibly documenting and naming already existing problems.

Feedback welcome on this accessible but obscure little venue ...