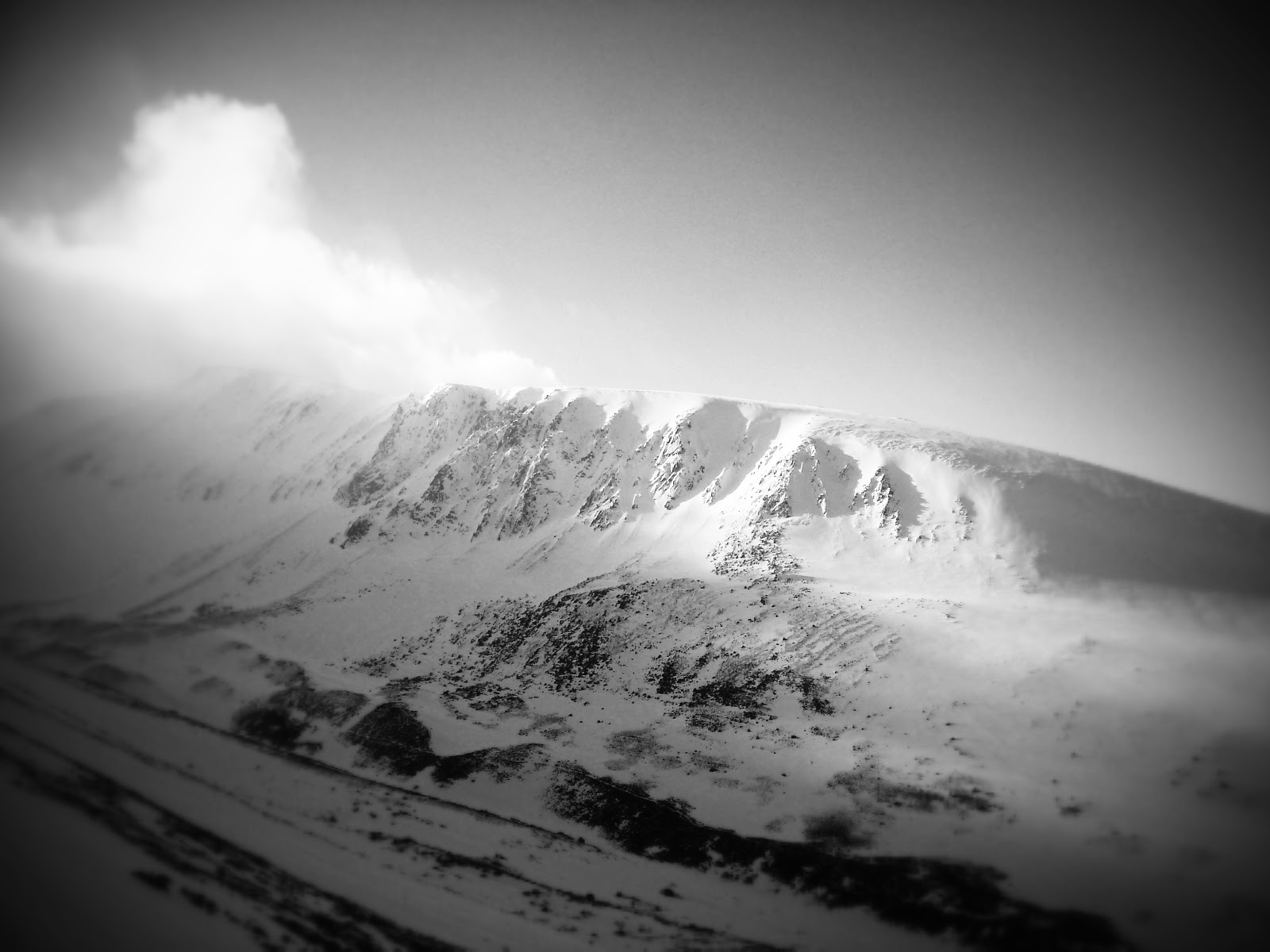 Before the milder weather arrived, we ran the Friday night bothy run from Glasgow to Newtonmore, then up early amongst the pines of the Sugarbowl into the Chalamain Gap and the Lairig Ghru. Lurcher's Crag provided an icy gully, sunny belays and views across to Braeriach's plateau S-carved with skiers. We meandered down snow-wisped slopes of Creag an Leth-choin, back to Aviemore for the night. 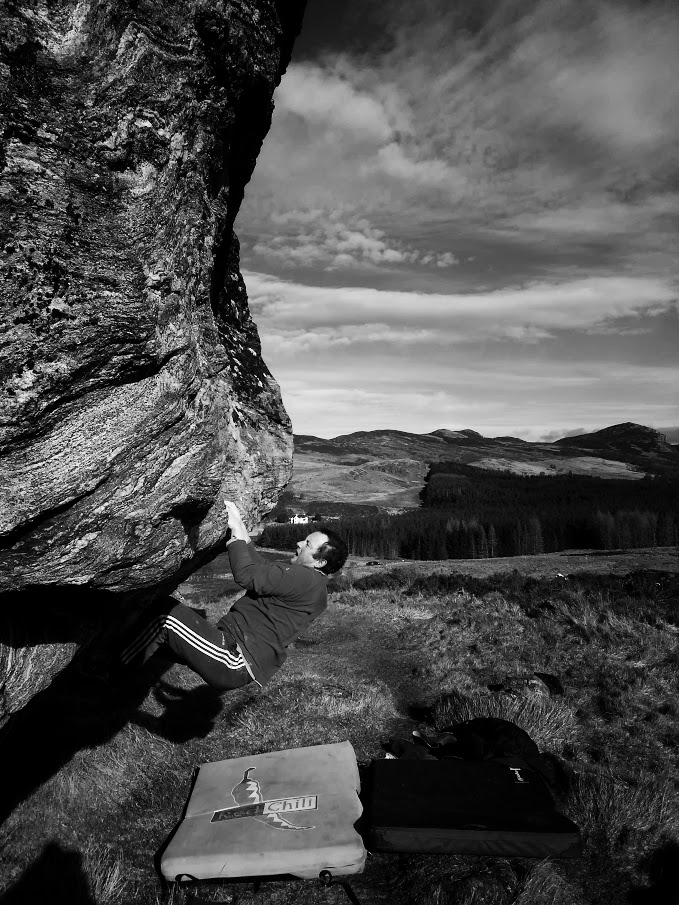 Strathnairn was next day's choice for some sunny bouldering, of course the Ruthven Boulder was the target after a visit to see the Farr boulder. A walker on his way up Stac Gorm called the uniquely rough gneiss 'Strathnairn granite' and noted to us that it necessitated wearing gloves if you were building a wall, as it tore the skin from your tips. We noted that too after an hour or so, as well as a general wilting of power on the butch bouldering on this world-class stone.

Here's a short guide to the stone: · Come off the A9 at Daviot, 5 miles south of Inverness, west onto the B851 signed to Fort Augustus

· Another 2km to parking at Loch Ruthven

· The boulder is obvious below Stac Gorm, south of the loch, a 5 minute walk uphill

‘Clach na Boineid’ in Gaelic, it translates as the ‘Bunnet Stane’, but to boulderers is commonly called the Ruthven Boulder. This is the Hulk of Scottish boulders, a steroid-pumped glacial erratic packed with bulging gneiss veins. The bouldering is amongst the best in Scotland, and the moves are technical despite the powerful approach required.

The Descent of Man 2

A layback gains the shelf and easier moves to the top. Also the descent…

The Cheeky Girls 6a

The wall right of the descent. Gain slopers and travel right to rock left.

The excellent juggy groove a few metres right of the descent.

The Razor’s Edge 7a

SS jugs under arête to crimps, then sharp edges and crimp up and left to flake.

SS edges to lip sloper, twist up left to jug, then mantle right to high crack.

SS as for above, but from sloper go right to holds and finish right over bulge.

SS under the big nose and climb it direct via one jug under nose. Start on small incut hold under roof travel right to a good hold under the nose (but no jugs!), break left through the prominent slopey nose and beg your way up to a high quartz hold. A classic struggle.

Start on the jugs right of the nose and pull into the groove. SS 6a from left.

SS Builder's Butt jug traverse along the front face to Big Lebowski around the corner to Rock n Roll.

2 small edges middle of left wall to good hold, RH incut then a long Egyptian up and left to a good edge, up to a layaway.

SS small edge to shallow scoop, lunge for hold left, a RH pinch to a LH edge then up to layaway and trend left.

Start on small holds at the bottom of the groove, some nice moves lead to beter holds all the way up the groove.

SS as above but a long move out right leads to hard sequence into hanging mossy groove. Direct top is 7b.

The Big Lebowski 7a

SS direct up through sloping shelf via pinch above.


The Big Tease 6b

Stand start right of arête to quartz blobs up and right, finish direct.

Start at a shallow horizontal crack and climb the wall on quartz holds.

SS flat hold left to quartz jug, back right over lip to crack and slab.

SS jugs under roofed arête right to crack and rock onto slab.

SS jugs and climb right of the arête.

Line of jugs between Cheese Grater and the descent.

Baby Bonnet. SS on a small shelf on the front right. Follow the holds left along the fault to a jug, take a slappy sequence left to finish up the blunt arête.


Turn The Other Cheek 6b+

Baby Bonnet. Starts the same as above to the good hold then head right to rounded holds, struggle onto the slab.

Embryo Stone. 100m uphill. SS on the downhill side of the boulder climb direct.

Embryo Stone. 100m uphill. SS downhill side of the boulder climb out leftwards.