August 18, 2013
Perhaps the worst time of the year to boulder in Scotland, July and August: midges still kicking about with the horseflies, the bracken at Jurassic height, the air humid and muggy, the rain biblical when it hits, impassable rivers in spate, the sun baking and lethargy-inducing. If you're not in the higher hills, it's a good time to head to the cooler coastal venues . . .

In Ayrshire, some new caving has been discovered, with plenty of potential. Some impressively steep caves may provide sport for the 8th grade climber and all will be revealed soon. Here's a pic of Colin Lambton on 'Mejico Prow', a fine 7a at the new venue. 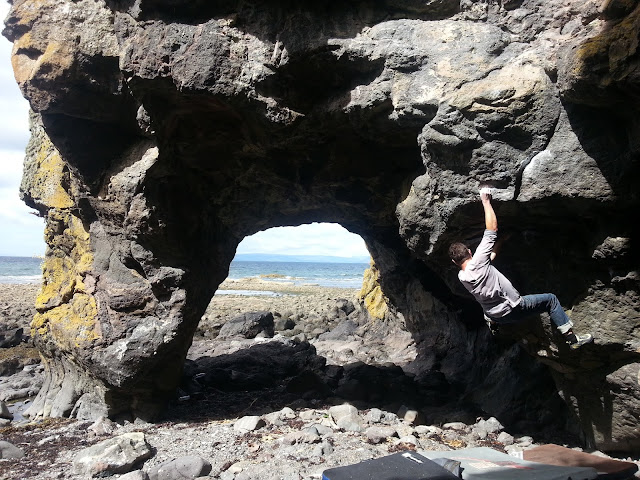 Callum Johnson  has been on the Isle of Arran and added a sit start to The Snare on Clach Dhruim a Charn to give The Rhythym which adds a little bit to an already brilliant problem! His party also added a few new problems in Glen Sannox: a technical wall problem on the front of the scooped project boulder which was Technical Merit and on the Great White boulder the south east arête that arches over the burn - an amazing feature that required some cleaning but yielded some brilliant moves up slopey lip holds to a crux mantle onto the steep slab: Jacks Little Brother 6c. At Cummingston Callum added a crimpy wall problem on the section between Batty Bat and The Shield giving; Attack Attack 6c. At Cullen Caves he completed a full low traverse of the sports wall giving To The Sea! 7a, a technical pumpy traverse.

Back in June, Chris Miele and friends added a tricky line at Glen Lednock: The Hurde (6c/7a) - the left arete of the kist boulder from sitting at a low crimp and high block.  03/06/13 - Chris Miele

In Glen Croe, Fraser McIlwraith added 'Float like a butterfly, sting like a Bieber' (7a+), a dyno from standing off a small crimp rail to lip, just right of The Nuclear Button.  04/05/13 - Fraser McIlwraith