Iron and Stone - The Ross of Mull 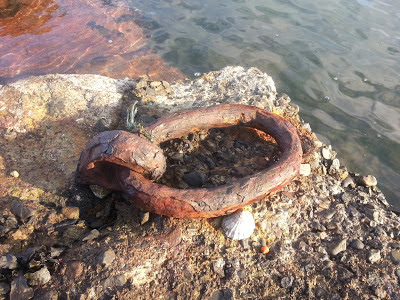 A week on the Ross of Mull. A high pressure settling over Scotland in February. Sunshine and pink granite... iron and stone. The week is a lesson in learning how not to shred yourself on large quartz and feldspar crystals, learning what can and cannot be climbed; the subtle differences between a blank wall and a smearable slab... 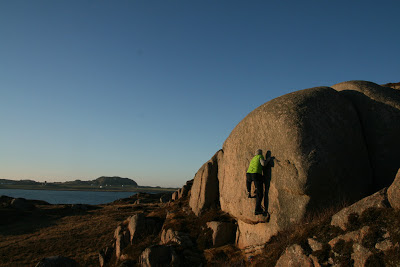 
If you turn left off the ferry at Craignure on Mull, you’re heading west along a gradually ageing sequence of geologies, through the tertiary gabbro lavas of Glen More to the earlier basal lavas at Pennyghael and the older still Caledonian schists of Bunessan and beyond. Then it all goes pink-panther and you hit a very old and colourful granite around 413 million years old, lavishly outcropping around the ferry port of Fionnphort, like so many bald monk-heads poking out of the machair and turf, occasionally sunburnt to a deeper red. Then it gets all historical on the ferry to Iona and its ancient Lewisian bedrock mocking the zealotry of monkish learning such as bouldering.

The granite sequence here provides endless cragging and bouldering, too much frankly to document and it creates havoc with plans, topos and access descriptions ... you're scattered everywhere with the wind and it matters not where you wander, there's always something to climb. 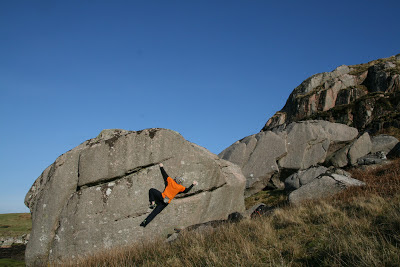 The rock varies from a crumbly, scrittly granite as poor as Weetabix to an incorruptible red/pink Quarriers' quality the like of which graces the Jamaica Bridge in Glasgow, or the Holborn Viaduct in London. All forms, fine-cut or coarse-cut, are shredders of hands and shoe-rubber. Slab technique is critical, as is a thick padding to the skin. The technical nature of the blank and slabby problems is complemented by the butch and generous nature of the steeper cracklines on roofs and overhangs. 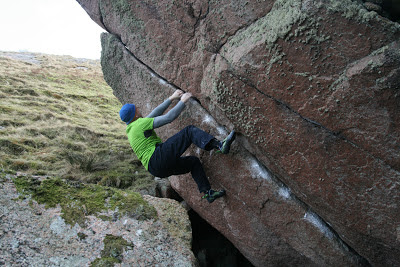 The Ross, the granite section at least, stretching from Bunessan to Fionnphort, north and south of the A849, is approximately 72 square kilometres of heather scrub, bogs and granite tors, of half-remembered topos, pub-phone updates, locals' narratives. I asked a local fisherman about the split rock so obvious on the beach at Fionnphort, which is known to tourists as 'Fingal's Rock'. The locals call it rather more curiously 'The Swordstone', and it does appear cleaved clean in two by a sword - the story goes that around 1870, the quarry had a lifesaving contract cancelled on a dubious quality control claim. This led to protests, the novel result of which was packing a crack in the rock with gunpowder and splitting the block in two, a symbol of the historical division between local loyalties and higher, vested powers in Scotland. A glacier may also have been involved in a much earlier event. 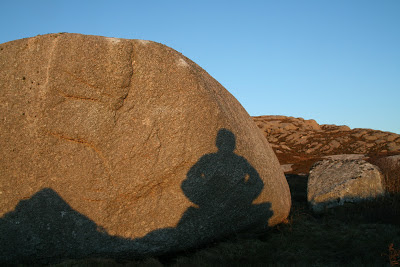 Nothing feels specific, and the vast landscape tells you why. Indented with glittering sandy bays and peppermint seas, such as Erraid’s idyllic Balfour Bay, the place is a perfect summer/winter playground for all ages of boulderer, and a vast hunting ground for the hardcore superstar. But you will lose a lot of skin discovering the good amongst the bad, unless you've as generous a guide as local climbing pioneer Colin Moody, who showed me around the classic areas and saved a lot of legwork based on rumour and dead reckoning.

If climbing tiny nubbins on endless slabs is not your bag, you'll want to head to the steeper roofs and cracklines . . .  tape up, and smile! 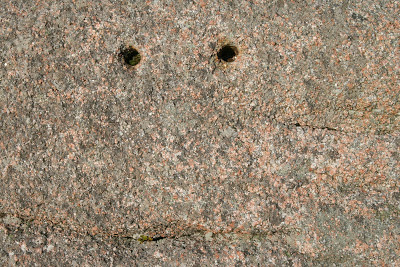