We have come a long way from the original stand-up start, indeed this didn't exist as a concept until we sat on our arses to add a couple of moves to a tired old boulder problem. The sit start is now so ubiquitous it might be better to highlight in guides which problems start 'homo erectus'. We have by no means stopped there in the evolutionary journey backwards to be as prone as a flounder under a piece of rock for fear one single, aesthetic udge might be missed.

We created the traverse as a crabby, contorted pump simply for the fun of it, or to create our own bibliography of extensions: ben, jerry, tom...  Then came the crazy-golf world of the 'eliminate' which is kind of like an apartheid for holds, where mostly big holds suffer a deletion of rights.

The modern bouldering corollary to all this arbitrary nonsense is the link-up, the bastard son of the eliminate.

The traditonal idea of the line is, apparently, subverted and twisted out of all normal, mountaineery meaning by the sudden veer left, the drop-down, by the well-met 'no jugs' caveat; or by excising all idea of a natural line as soon as it becomes apparent you might actually be climbing something. It is usually an algorithm of grades or cruxes, climbing by numbers, but equally it could be the collection of satisfying moves and exotic postures, the limit being only how far you are prepared to leave your mother sport.

None of it matters a jot and it would only be natural to see a future of suspended-in-air slopers with no actual substrate, between which we happily one-arm like a gibbon in a fig tree, as the final evolutionary step in removing bouldering from the need for any summit. After all, we all grew up on those geodesic climbing frames, chasing each other round in circles, bat-hanging by the backs of our knees.

So why fret over the infinity of link-ups as an affront to climbing? In fact, right now I'm inspired to go and find the first 3-star downclimb into a sit start eliminate... no jugs allowed, of course. 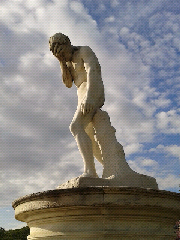