September 09, 2012
This unremarkable and indistinct bump of moss is remarkable for its surroundings rather than the character of its summit. The more satisfying ascent (if not climbing Meall Corranach) starts from the Roro bridge in Glen Lyon, a few km east of Bridge of Balgie, with the recommended circuit going up the east glen and a grassy descent down to the west glen.

Park at the Roro bridge testing station and swing round the road to a T-junction, heading left towards Roromore. Just before the fence at the Allt a' Chobhair, follow the burn uphill by a fence through more interesting scenery than the farm track across the river. It leads past some glacial boulders to the old shieling village under Coire Ban's scree slopes. Follow the wall uphill to the Coire and either strike up left steeply, or follow the fence right to the blunt ridge of Sron Eich. A gradually easing angle leads south to the summit plateau of Meall a Choire Leith, which I think is named after the adjacent Coire Liath (the grey corrie) rather than the translation as the 'hill of the shivering corrie' (though that's more descriptive of a winter ascent). The panorama of Meall Corranaich to the south and Ben Lawers and An Stuc to the east is dramatic and imposing. 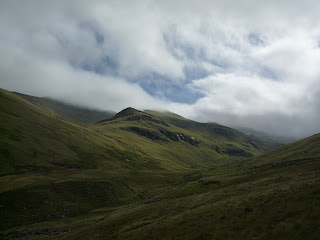 
A grassy stomp leads down northwest to the tranquil Gleann Da-Eig past more shieling sites with the remarkable split rock of 'Fiann's Arrow', or the 'Praying Hands of Mary' (depending from which angle you view the rock, or who you talk to), situated at the base of the glen west of the burn. The twin-notched rock may be the eponymous feature the glen is named after in Gaelic ('Da Eig' -the two nicks/notches).


To the east of this is the rocky bump of Dun Chnocan, with a collection of large boulders and an interesting shepherd's cave with an arrangement of cup marks, bored into a silvery plinth at the best seating spot for waiting out bad weather. Who knows how old this is, possibly neolithic, as the glen would have been even grassier then and the peat unknown, so it would have been an isolated but fertile glen. The arrangement of the cup marks is interesting, a central large hole flanked on one arc with five subsidiary, shallower holes. It can be found as a roof shelter looking east down Glen Lyon at NN615464. My imagination resolves this as a single hole bored by a shepherd, the others representing, or perhaps added to, by his sons - a family tree. The fan-like geometry certainly invites interpretation, but the real meaning is lost. Perhaps they are no more than idle, bored doodles from long wet days as a shepherd, sometimes you feel this is as valid as more 'sacred' interpretations.


Oh, and I found some good boulders as well. At NN622462, beside the Allt a' Chobhair, there are some attractive boulders, the highlight being the grassy patio'd roof boulder. The east prow is a good 6th grade pull and the central roof has a few similar grade exit lines onto the slab. Not high, but perfectly formed, I saw some signs of climbing but more brushing would help. The best development would be at the collection of roofs, walls and boulders round the contours at N614464, just south of the summit of Dun Cnochan. A track leads up to these from the east sheepfold of Balnahanaid Farm at Roro. Again, many need cleaned, but some rock looks very good - the red wall looks like a classic, if easier, 'West Side Story' and there is plenty of scope for short, butch roof problems.