Requiem for a Boulder Mat 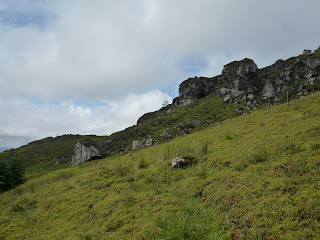 It must be an age thing, but I found myself ogling new bouldering mats online, in preparation for patio-ing out my autumn project, when I just realised, jeez, I had another mat already. It was up in the Coilessan boulderfield, hidden under a roof. Was it? Or was I losing it? Bloody hell, how long ago was that, I thought? Three years? Oh well, best stomp up, hunt around in the hope of retrieving it, in whatever state it had been left by the Scottish elements. I seemed to remember leaving it under a steep project prow, fully intending to come back the next weekend... it was old and manky then, what hope for it now? 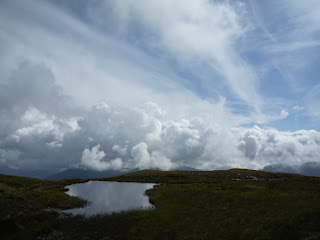 The plan was to do a good 10km stomp-around anyway, for it was way too hot for a bracken-fighting, tick-picking bouldering session, so losing some weight seemed like a good idea. I ran up the track for a couple of km, found the white post, stomped up through the 'bastard' tussocks and made a beeline for the giant boulderfield. Just getting here with a mat earns a 7a, I think - especially when the vegetation is in full camouflage outfit in July. This is a place with more projects than completed problems, you'll see why when you get lost in the maze of gullies, trapdoors, chasms, roofs and prows - lots  to come back to, maybe, but I always get here bushed, too hot and scared to death of the man-eating nature of the place. Jesus, even the horseflies were oversized, military-spec monsters! 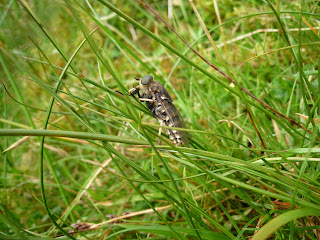 I found a few more good landings and nice leaning walls, then found my mat, wedged like a geo-cached mattress between two boulders. It was UV'd to a sickly white, spotted with fungus and when I pulled out the foam, a flurry of confetti and scurrying mice disappeared into the blaeberries. Munched to death! 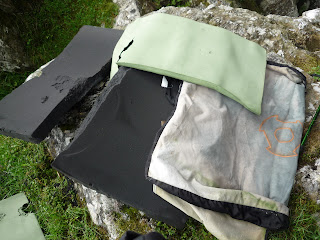 I stuffed in what was left of the guts of  the smelly, damp old Dropzone and carted it penitentially over the castle-cragged Cnoc Coinnich and back down to Glen Coilessan.

If anyone knows a good seamstress and upholsterer, let me know... 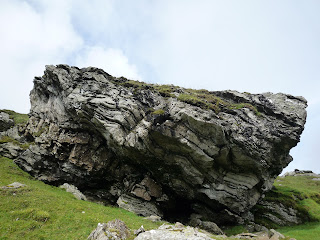