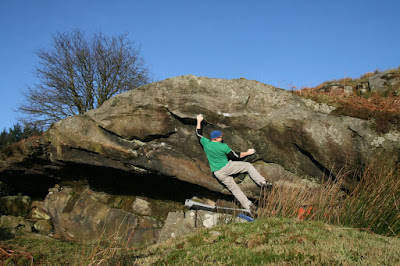 A perfect morning at Craigmaddie on Thursday 12th as the weather finally settles and the blue skies return. Warmed up on the lower roof lip traverse, trying not to slip off into the boggy gunk below. Then settled on the first 6c of the season, 'The Plinth' left hand version. It starts off the plinth, using the big block underneath for the feet, slap up the crimps on the shield, then a crux throw left for the sloper leads to a tricky one foot smear as you stare at the slopey ledge hold for the right hand. Not over yet, an easy-to-fail snatch for the top - a super problem and under-rated - feeling harder as the sandstone is still bleeding a little winter damp and my right hand kept flipping off. 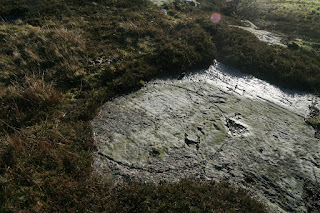 Millstone circle or gnomon? What does the 'H' mean?

Reading up on Craigmaddie Muir, it has some interesting hidden history. Not only is there evidence of Neolithic and Bronze/Iron Age tombs and settlement, this is all confused by an overlay of millstone quarrying. I found some interesting symbols under the big roof, mason marks of all sorts, next to the names A. Cairns and J.Neilson and an unfinished 18** date inscribed on the rock. Must check Bardowie cemeteries for masons... 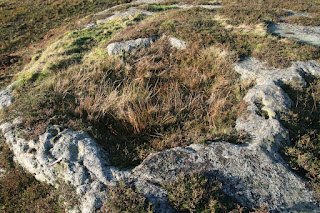 
On the plateau are dozens of quarried 'cogwheel' pits distinctive of millstone quarrying. Holes would have been flooded with water and wooden splints inserted under the semi-carved stones. The water would swell the wooden wedges and snap off fully-formed millstones. The quarriers also had a mischievous bent, as there are 'fairy' carvings all over the place, including an Egyptian-style 'eye', a gnomon circle (or millstone peck-tracing), mason marks, names, mysterious 'H' marks, faces on the Auld Wives Lifts (and lots of Victorian graffiti), and even a 'fairy footprint' in the rock, a bit like the King's Footprint at Dunadd, but obviously moulded on a size 6 welly boot... or perhaps this was the ancient seat of a lost kingdom?  I still haven't found the reputed serpent carved in a plinth and reported in an old archaeological survey. 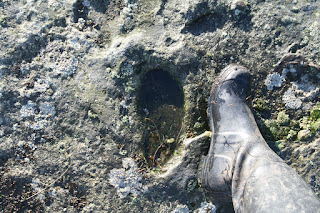