January 08, 2012
A week in Ullapool over New Year saw us staring out of rain-lashed sash windows, or sqeezing blustery walks in between painful hail showers. Constant winds had brought up an impressive surf at the normally placid Achnahaird. 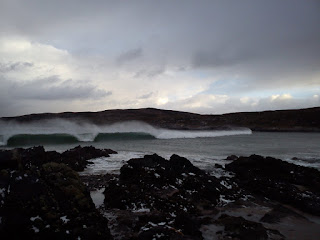 I even tried to crank out the aptly named Clach Mheallain (Gaelic for 'hailstones') at Reiff in the Woods, racing to get myshoes on before the approaching storm, but fingers grew too numb and my boulder mat flipped over in my face - game over! a few boggy trots hunting down boulders led to one entertaining cleaning session in a full-on  rain storm, which was like scrubbing a filthy land-rover in a jet-wash.

A week of storms throughout the country has led to the most saturated ground I've seen in Scotland, rock didn't stand a chance of drying in the bitter winds. We retired to the Ullapool Bouldering Wall, trying hard not to pull down Ian's carefully constructed training boards after too many pints and pies. 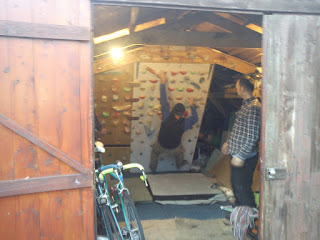 Corrieshalloch Gorge was the most impressive feature, in full flow and pretending (bar a few tens of degrees) to be something out of a tropical Jurassic period... 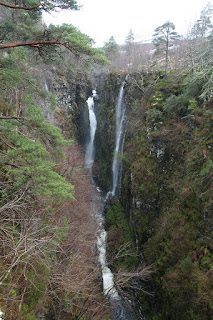