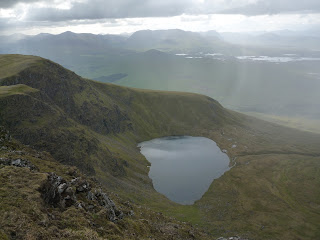 The biggest peaks in each Scottish Mountain range - how many are there? Not as many as Munro's table of clustered bumps (pity the poor Skye bagger on the ridge!). The qualification is simple: the biggest peak in each distinct mountain range, though distinction is sometimes difficult. While this might seem lazy or just as arbitrary as Munro's fascination (a case in point is the Cobbler, much more dramatic than Ben Ime), it is at least not quite as obsessive, as each range gives a geological colour of its own and climbing the highest peak (usually) provides a good enough walking challenge, as well as offering a more realistic tour of Scotland's landscape, with landscape in mind rather than a tick-box. A good example of this is the northern Breadalbane range of hills sandwiching Glen Lyon. Beinn Dorain dominates only because it's by the road and it naturally captures the attention, but Beinn a' Chreachain provides a more remote experience entirely and arguably a richer experience of the landscape. 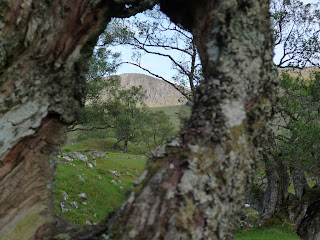 The most northerly sentinel of the Breadalbane range of hills (and the highest in the group), Beinn a' Chreachain ('the treeless hill' or 'the hill of the clam'?) rises to a blind bare summit cairn of  1081m. This fantastic hill is propped on top of the Coire an Lochain cliffs surrounding the dramatic clear pool of Lochan a' Chreachain. The walk to reach the start of this treeless hill paradoxically passes through a remnant of the Caledonian Forest - in Gaelic on the OS maps it  is called 'Crannach': 'abounding in trees'. 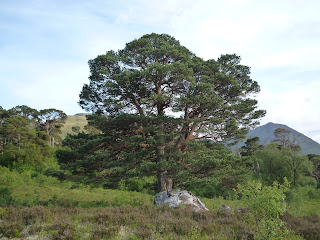 The walk starts at Achallader farm, home once to the duplicitous and treacherous land thief 'Black Duncan' (a graveyard of the original owners  - the Fletchers - is supposedly nearby the ruined castle). The path follows the Water of Tulla along fine shingle banks where waders nest in the pebbles. The river is full of small, leopard-spotted trout. 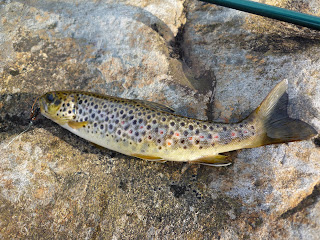 Soon you are diverted uphill into the wonderful old forest of Scots Pine, birch, alder and mountain ash and fine bog flora such as giant clumps of butterwort.The old trees I noticed had lost a few limbs in the recent storm of 23rd May, revealing fleshy white scars - thankfully the dry spell of April saw no fires (it's been a tough year for trees in Scotland!). It still retains that romantic magic of the 'Lost Forest', the Rannoch bog having failed to spill over and climb the northerly flank of the Breadalbane hills to which they cling. The railway barrels through the forest but is well hidden and I only heard two trains all day. The path loses itself at the end in a fenced off area where the density of saplings increases and the bogs deepen, one can almost imagine the primal Scottish habitat of boar, auroch, lynx, bears and wolves... 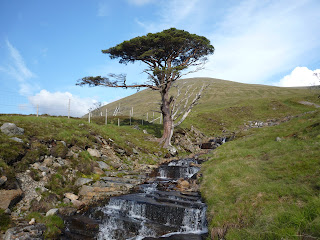 Suddenly you are spat out onto a fine grassy sward by the steep Allt Coire an Lochain - look out at the burn for a very old twin tree of alder and mountain ash, intertwined by centuries of growth. The path continues up the burn to the last bastion of a Scots pine at the 550m contour (your halfway height). From here you can take the easy left flank of the hill, but I prefer the steep climb into the dramatic corrie by the Lochan. I had my fishing rod, but over a brew of tea it became apparent there wasn't a single fish here. I wonder if they had been frozen out of existence by our last two arctic winters or if they were hiding in the depths, but not a single rise kissed a circle on the surface. 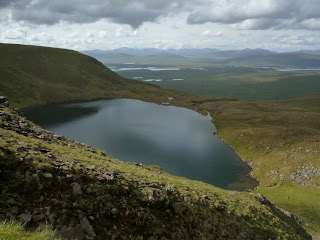 I heard the ventriloquist fluting of ring ouzels somewhere in the scree, but could I spot them hell. I gave up fishing and bridwatching and bashed up the punishing gully on the east side of the cliffs to a bealach and a fine view into Glen Lyon. A short gasper to the summit quartz gained the highest peak in this massif, with grand views north over Rannoch to the Coe and Nevis ranges. Most folk return along the plateau via Beinn Achaladair to bag the peak, but not being a bagger I meandered down the ridge and back into the depths of the forest, rewarded by a late evening sun-glow on the red limbs of the old pines. 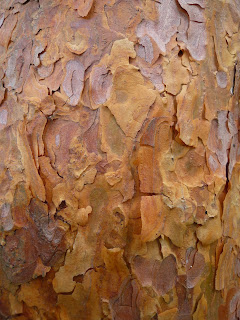