Where have all the trees gone? 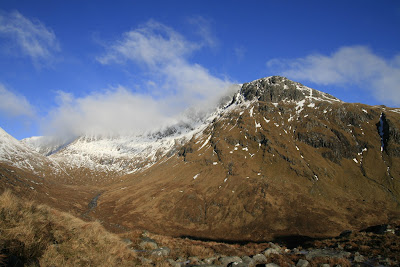 Hard times we bring upon ourselves. Slowly, wilfully, over the centuries, things disappear, ownership takes all. Take the mythical Caledonian Forest. A canopy of blacky greens, flashed with broad red limbs, standing shoulder to shoulder through the glens, over the bealachs, climbing the mountain sides.
I was at the head of Glen Nevis, at the gorge car-park, having driven through a remnant of this forest, like a battlefield after the war, a few stragglers - twisted, wounded soldiers of gruesome witness and blooded limb. I was keen to go a step further into a 'lost corrie' cupped between the Ben Nevis and the arcing ridge of Aonach Beag (paradoxically higher than Aonach Mor by 13m).
Rarely visited and tucked away from the North Face crowds on The Ben and the skiers on the far side of Aonach Mor, this corrie translated as 'Corrie of the Pine Woods'. I climbed steeply up through the gap of the Bealach nan Cumhann (Pass of Lamenting!) and was stunned by the austere 'majesty' of the empty corrie, flanked by the pale schist crags of Aonach Beag and the watershed ridge on my left above Sloc nan Uan (the hollow of the lamb). A lone stag coloured suddenly as he ran into low sunlight across the valley floor and fled my fearsome stink into the shadows of the An Teanga boulders and crags on the tumbling lip of the corrie bowl. 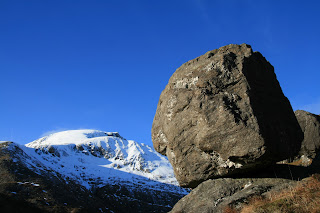 The corrie is a high hidden U-shaped valley, a textbook diagram from a geography schoolbook. Hidden behind the glaciated craggy lip of An Teanga (the tongues), I expected a few old Scots Pines, but not a tree was to be seen. The river meandered in languid pools between gravel beaches and reedy lawns, withering uphill into the Coire na h'Ursainn (the backing corrie), where an oddly named source stream was marked on the map as 'the river of the fringe'. The fringe of the forest, I took it; the mythical forest wherein deer might once have lazily grazed without the long human shadows from bealachs to scare them across vulnerable space.
But where had they gone? The Steall ruins at the bottom of the Allt na Coire Giubhsachan tell a tale of abandonment, of lost resource and wooded landscapes harvested of all hope. The high corrie bowls such as the Hollow of the Lamb and the Hollow of the Calfs face each other across a barren bog in a stripped world. It may suit modern tastes for 'barren wilderness', but it is overseen more aptly by the craggy hump of Meall Cumhann - the Hill of Lamenting.
Weather did change in the past, the peat bogs grew during the iron age, but in two millenia, this wooded corrie has seen the trees, those august red limbs, retreat downhill and vanish from sight altogether. Once gone, the sparse odds of a sapling surviving ruminating hordes or the sudden bleak exposure, highlights the ringing tragedy of Gaelic nomenclature. The words are indeed shadows, echoes, of  lands of living, work and meaning.  Each word is a lament, for the lowing high pastures, for the whispering canopy, for its own vocabulary of place.
Like the tide of itself, the woods and people have receded, as integrally as they did on Easter Island, the sheep arrived and further clearance continued. Humans just did for this land, out of synch with the longer rhythms, falling foul of their own self-hatreds, leaving nothing behind but the words behind the pointed finger...
bouldering Scotland gaelic place names