February 09, 2011
We have more stock of the Dumbarton Guide available (on the climbing books page), though well done to Will Atkinson for putting it out of date with the send of the 'project' he calls Ladderman... one for the tall folk I think!

We have a very promising crag/boulder wall in the Northwest from Ian Taylor, but I guess development and location will be revealed this year... this does look attractive mind you! 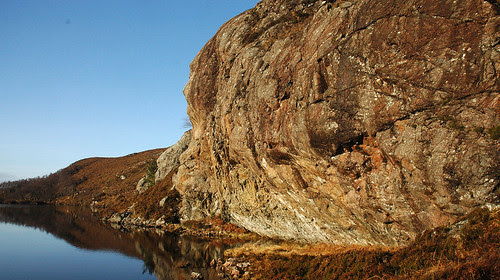 Mike Lee visited the Katrine Bloc:, the baddest, meanest, weakling-crusher rock in Scotland, here's Mike under the unclimbed front face. It takes over two hours to get to, best bivvi for a weekend and bring some fillet steaks...that face is 8a to 9a only. I retreated wishing I was younger, fitter, stronger... it's located under the Meall na Boinede crags overlooking the north end of Loch Katrine. The best way to get there is to hitch a lift with the postie bus from Strronachlachlar, or cycle/walk round the north end of the loch from here. Get off at Portnellan Burial Ground and the Black Island, then walk uphill on the left bank of the burn. You really can't miss it... good landings, the rock is a delightful scalloped and compact schist. GR NN410124 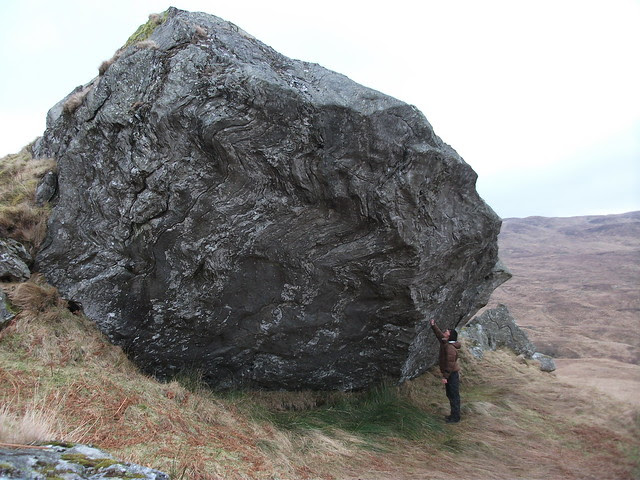 Looks like Tim Rankin has butched out another 8a at Cammachmore -Devistator - on the Optimus Prime boulder, hopefully more details soon but terrific to see the NE benchmarking again (or should that be bench-pressing?)

August 18, 2017
In his famous 'allegory of the cave', the Greek philosopher Plato pondered the artificiality of reality in imagining how we could be fooled into thinking shadows on the wall (i.e. virtual reality) could be seen as 'real' life. I'm paraphrasing, of course. What has this got to do with climbing? Well, I was pondering this myself recently while sitting on an artificial concrete boulder at the new Cuningar Loop bouldering park in Glasgow. Does it really matter that a boulder is made of concrete, surrounded by plantation and skirted with kind gravel traps rather than tree roots and spikey boulders? Isn't the 'real' thing so much better: the isolated erratic bloc deposited by geology's long-term aesthetic artwork? Well, yes, that's entirely up to you, but sometimes the artificial saves the day ... I was scuppered by Glasgow's cross-town traffic and turned back to my local artifice that is Cuningar to climb the blue circuit I had imagined as
5 comments
Read more

September 05, 2018
The Moray Firth’s sand-bitten southern coast, between Findhorn and Nairn, is home to Scotland’s most cautionary tract of land. Now a wilderness of maritime forest, dunes, salt marsh and spits of sand, its human history has been dated to the Bronze Age, around 1300 BC, but it is a territory that since glacial times would have been mobile and mutable. The Laich of Moray is the fertile strip of plain squeezed between the foothills of the Cairngorms and the Moray Firth’s south coast. In Gaelic it is called Machair Mhoireibh (the machair of Moray), a perfect habitat for golf courses and rich arable farmland, threaded by the glacially-rivered straths of Nairn, Findhorn and Spey. Culbin is an old parish which is now buried under 28 square kilometres of duneland and recent forestry. Sweeping east of Narin and curving in to rise up to its greatest heights above the estuary of the River Findhorn, it is now managed by Forestry Commission Scotland, but it is notable that this is a humanl
1 comment
Read more

November 19, 2018
The Glasgow branch of The Climbing Academy (TCA) is just about to open its new bouldering and lead-climbing centre on Glasgow's north side. Its south-side twin ('The News Room')  is already a popular bouldering centre, but the new site will bring fresh inspiration to climbers on the north side of the Clyde. Situated in Maryhill, not far from the West End, this new centre is named after an old BBC prop warehouse, so it's been named ' The Prop Store '.  The centre feels roomy and spacious with a long profile. The holds and panels are super-grippy and there are some free-standing boulders to mantle out as well as an impressive offering of angles, roofs, slabs and subtly sweeping walls.  There is also a section of lead wall with auto-belays for top-roping practice, and a training centre upstairs. They should be open this December, but here are some preview shots.
Post a Comment
Read more