'Heavy on fact, light on fairies' - The Stones of Strathearn 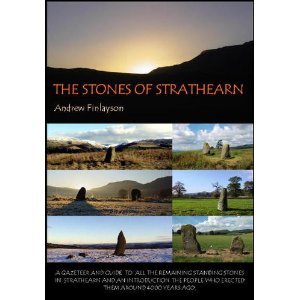 Andrew Finlayson, the producer behind One Tree Island Publishing, has brought out a lavish new guide to the standing stones of Strathearn. This fertile and secluded land, situated in the Earn valley between Perth all the way up its headwaters of Lochearn at St. Fillans, is home to some of Scotland's earliest monoliths, cup-marked rocks and stone circles. These distant echoes of a neolithic society still have a resonance to them, a tangible sense of place, and Andrew has produced this superbly illustrated gazetteer to  the history and provenance of these stones.
This convenient ring-bound book acts as both a guide to each site and a detailed history to its neolithic society, engineering, farming, astronomy and symbology. He details each stone meticulously and with  fine technical drawings and colour photography, including more famous monoliths such as the Sma Glen's Ossian's Stone, as well as 'quieter' but astronomically important stones such as Tullybannocher. The beautiful artwork re-creates the cup and ring marked artwork and makes us ponder the complex spirit of the neolithic mind. 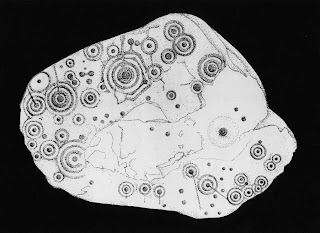 This is a tremendously detailed re-imagination of a Scottish neolithic valley, leading us between its silent monoliths and capturing the rhythms and deep connections of a long-vanished culture, one obviously sophisticated enough to understand its small place in the universe. Unlike some fatally mystical books on the subject, it is refreshingly practical and lets the stones do the speaking: as Andrew says - it is 'heavy on fact, light on fairies'.
The ring-bound book also a fantastic walking guide to the stones and is available with a free 2011 calendar through the One Tree Island site or here at Amazon.
neolithic Scotland standing stones stones Strathearn