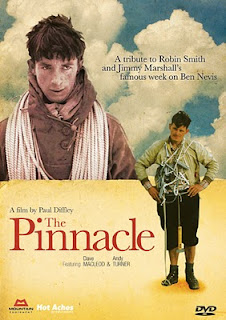 The latest film from Hotaches, The Pinnacle is a welcome historical tribute set amidst our normal dietary blizzard of modern Youtube ascents and techno-sodden bouldering movies.  Tracing one epic week on Ben Nevis in 1960, and the two climbers who took to the wintry corries of Ben Nevis (Jimmy Marshall and Robin Smith), it brings into focus a clear Scottish ethic that climbing is about the landscape, the adventure, the friendships and the moment...something which Jimmy Marshall insists is the core lesson of a lifetime in the mountains - that climbing is not about the noise afterwards but rather those brief moments of unseen joy in the mountains.
This filmic tribute is in essence a remembrance of Robin Smith, a luminary climber of the 1950s and early 60s who sadly lost his life in the Pamirs in 1962. In one of the many poignant interviews in the film, an older but still rugged-looking Marshall describes Smith's climbing prowess with an undiminished clarity of remembrance, describing him as possessing 'startling brilliance' on the rock and ice. Had he not been outlived by Jimmy, Robin would have gone on to climb just as many legendary ascents in Scottish climbing, and in this particular case Smith's early demise does not romantically exaggerate his boldness, talent and  vision.
The legacy of routes he did leave behind reads like a climbing version of the illuminated Book of Kells: Shibboleth, Smith's Route, Yo-Yo, Orion Direct, The Bat, The Big Top, Pigott's Route, The Needle... and so on. These routes, in most folks' guidebooks, lie underlined and starred but mostly unticked! Three of these are hard winter classics on Ben Nevis, climbed in that one special week in February 1960 when the two had the mountain largely to themselves - Marshall describes The Ben in winter as a 'wedding cake' and this is an apt metaphor for two climbers who combined a very special mountaineering marriage of skills. That week they entered a time of legend through the simple dedication of men with axes and gloves and nothing more than a length of old rope between them.
The film takes great pains to highlight this week as a watershed as much as a pinnacle of winter climbing achievement in Scotland. The routes that Smith and Marshall climbed were the last (and hardest) done in the old style of step-cutting without front-point crampons. This laborious style of climbing is the only moment in the movie where the two modern tribute climbers - Dave MacLeod and Andy Turner - look decidedly common and discommoded. They quickly return to their modern front-point crampons, curved drop-head axes and ice-screws for protection, all of which is roundly booed by entertaining old-schooler Robin Campbell of the SMC.
As the two modern lads smoothly tick off the daily diet of historical climbs, in lean but benevolent conditions on the Ben (something the producer Paul Diffley must have been thankful for!), the void between the new and old eras yawns open and it becomes apparent how our expectations, staminas and prorities can change so much in 50 years. Marshall talks of the difficulties they faced as irreversible in many instances and Ken Crocket provides some honest testament to how even three days on the Ben can wear you down dealing with fear and death at every climbing moment. The depth of fitness and inner resolve to climb for seven days on such an alpine set of cliffs (and pack in a day's Munro-bagging and an arrest for stealing dominoes in a Fortwilliam pub) is simply staggering to our modern sensibilities. The walk they did on their 'day off' leaves Macloed and Turner lost in the dark scrabbling for map and compass, exhausted, dehydrated and, in Dave's words, with their 'legs singing'.
The film is a rare jewel of climbing history and and a visual treat for the guilty armchair mountaineer! It ends on a grand panorama of Andy Turner topping out on the Ben Nevis plateau to a stunning Scottish winter horizon. It leaves me with a feeling of profound longing for those special mountaineering moments that become ever more rare and inaccessible.
Our greatest danger lies in growing reliant on exterior motive and engineered moments, rather than the indelible purity exhibited by elegant climbers such as Smith and Marshall. Thankfully, The Pinnacle never loses sight of this and both Dave MacLeod, Andy Turner and the production team should be proud of their tribute week on the Ben. The Pinnacle captures something very fleeting about the games climbers play and the joys they discover.
climbing Scotland films Scotland