November 09, 2010
There has been lots of new activity as usual this year in Aberdeen, the NW and Dumbarton Rock in particular. Some venues continue to expand their repertoire such as Glen Nevis, Glen Lednock and Torridon and Applecross, with Coire nan Arr the best of the bunch in terms of rock quality and stunning new lines.

Macleod's Arisaig cave was a hardcore find and Dave found some high-end training traverses on immaculate quartzite. His two main problems there were At Eternity's Gate 8b, Triangulation 8a and All the Small Things Font 8a.


The sea-cliffs at Aberdeen continue to provide meaty testpieces and good traverse training. Tim Rankin did a new problem on the roof just right of the Big Grey boulder called Delirium at 8a+, very slopey and condition dependent through the lip. 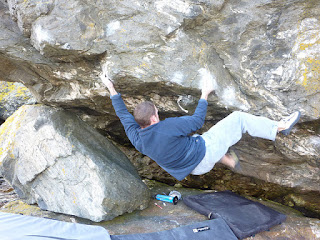 Delirium 8a+ Clashfarquhar - pic Tim Rankin
At Coire nan Arr, Richie Betts discovered the Universal, a 7b of immaculate red Torridonian sandstone, as well as a handful of good circuit problems and mid-range grade classics. Hopefully we'll have the guide out in 2010 for this incredible area!
The Universal, Coire nan Arr - pic Richie Betts
At the end of the autumn season, Richie succeeded on his project high on the slopes of Glen Torridon to bag the almighty prow of The Essence 7b+, which was shortly repeated (after 3 dedicated Scotrail weekend journeys from Glasgow!) by Murdo Jamieson. 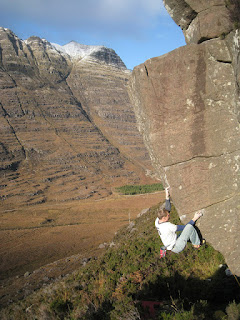 The Essence - Torridon﻿ - pic Richie Betts
At Dumby, Will Atkinson and friends set about the Mugsy roof to create a whole new breed of problems linking up traditional classic lines. Perhaps the best is Nice &Sleazy 7c, linking up Mestizo Sit, Mugsy traverse and Malky...not a bad line at all! Malcolm Smith also crushed out the obvious link of Pressure into Firestarter to give Firefight Font 8b.


Firefight 8b First Ascent from Will Atkinson on Vimeo.

Harris saw some particularly avid attention this year, Dave MacLeod climbing Proclamtion 7c+ at the Clisham boulders, plus a few new problems at Sron Ulladale in between trad epics. 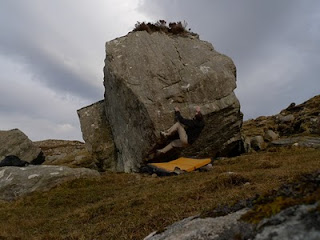 Proclamation, Clisham - pic by Dave MacLeod﻿
Mike Lee did his usual touring of remoe spots and quietly climbed some hard classic lines... at Glen Lednock he did a lovely 7a called Afraid of the Wave, a kind of direct of the Wave problem. He also did numerous eliminates at Dumbarton, including the excellent 7b+ Le Tour de Technique. 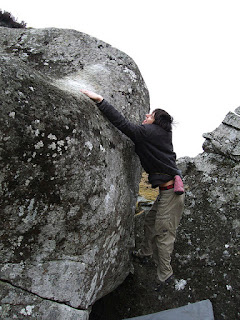 Afraid of the Wave 7a - Glen Lednock - Mike Lee
I'll add more if I hear of anything but next up is a feature on the new circuit problems - you know, the ones most of us can do!