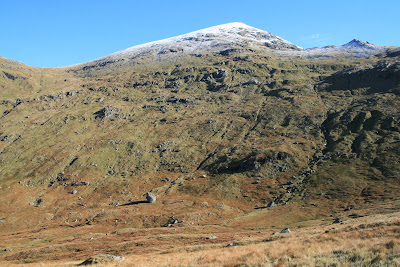 I spent a fine Sunday amongst the early Autumn snowcap peaks of Ben More and Stob Binnein,  stomping round the giants of Benmore Glen. In summer, this area would make a good venue if you can stomach carrying mats up this far to protect some of the highball lines. The  landrover track from Benmore Farm makes this higher glen reasonably accessible and an hour's slog at most. Some good short steep roofs can be found on the bigger blocs such as the Heather Head. There is some sound clean stone as well as the usual lichenous schist found on higher altitude stone, as though it needs a rhino skin to protect against the withering bealach winds.
The best rock was found on the giant of the upper glen - the massive and lonely Benmore Bloc which can be seen from the old rotten footbridge as you gain the higher glen. Sitting in the bowl of the upper glen under the Bealach, it has four distinct and just about boulderable faces (in terms of height). The bloc has some fine easy lines, some hard mid-range classic '7th grade' lines and some futuristic lines on its steep north face. All the landings are good (while other stones are typically boggy). The best stones are: the Heather Head boulder just uphill of the old bridge; the Ben More boulder itslef and the Bealach blocs.
View Ben More Boulders in a larger map
bouldering Scotland