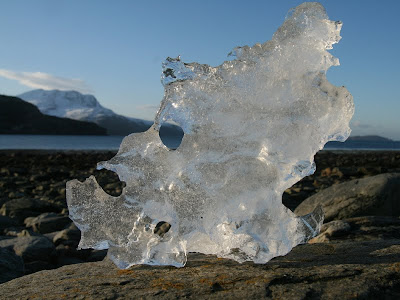 So who thought we would never get a winter again?
The festive freeze, which looks like lasting over a month at a below 0 average temperature, has caused traffic chaos and made it pretty difficult to actually get into (and out of) some of the hills, especially the remoter car-parks, so activity has been limited if you can't afford snow tyres or 4x4's. Compounded by overstretched (or gambit-funded public roads services), travelling in Scotland has ground to a halt in most places. One trip from Glasgow to Ullapool at the height of the chaos took me 9 hours and one 4km hill walk took 5 hours. Not a great average. I'm sure many folk have had excruciating walk-ins to the cliffs, or simply bagged some convenient roadside ice instead.
2010 is here with a cold vengeance so what has Stone Country in store? Well, in mid January we are expecting delivery of the 2010 Scottish Climbing Yearbook, an 80 page photo/topo magazine to the most exciting developments in winter, bouldering, trad and sport. I'll put a feature on the Stone Country site once we get stock... it's a useful glove-box thumber for £6.99 and will get you to some new crags and bouldering spots.
In the summer we hope to have the first of a series of climbing books and biographies, starting with Jules Lines' book of epic solo tales...I can guarantee it will be a hell of a read from one of our most impressive and humble solo climbers. A new series of guidebooks is also in the offing, but I'm not saying what will be out first, let's leave it as a surprise.
Anyway, best of luck to all in 2010 whatever your bag...
bouldering Scotland climbing Scotland