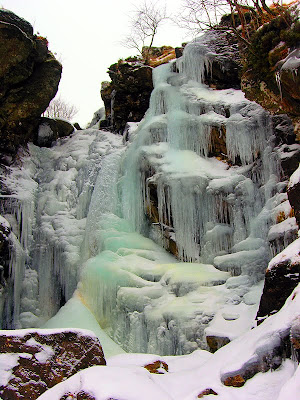 Ardvorlich Hidden Upper Cascade
Though I knew of the Loch Lomond falls at Inverarnan and Eas Ruaridh having been climbed and often in nick in a cold winter such as this, I'd not heard of the Ardvorlich cascades having been climbed, though I expect they may have been in distant cold winters such as '96, '79, '67 or even the big chill of 1946? They can just about be spotted from the roadside at Ardvorlich B&B just after Inveruglas on the A82 on Loch Lomondside, just above the 400m contour. We hiked up there in deep snow, an exhausting hour's trek hauling up the square-holed wire fence to the obvious cascades which looked blue and chewy and inviting. As usual in winter, the climbing was not as steep as it appeared from the roadside, but two very good lines can be climbed on the lower falls in two pitches to a tree belay at the top, from where a bonus surprise awaits: a frozen enclosed gorge with tumbling blue ice, its central feature a frozen blue chamber of ice with water cascading inside its giant ultraviolet trunk. The ice was thick on the outside of this cascade and allowed two pitches either side of it at about Grade 4. For these extremely cold January conditions, this icefall is another fine option for accessible water ice and much fun is guaranteed. The falls can be climbed almost anywhere but there are two distinct fall lines, left and right, with steep grade 4 steps and intermediate grade 2/3 slabs. The top fall is about 50 m further up the riverbed and obvious once you top out the bottom falls. Access: from Ardvorlich B&B but park on an A82 layby 300m before the entrance, hop the fence to the lower farm track (not the B&B track), follow this under the railway and uphill steeply for 1km past three bends. At a rock slab contour hard right round the hill to the river and follow the fence up to the lower falls. The best 2 routes can be climbed in three pitches each, described here for reference only as I'm sure someone may have done variations of these before in the dim and distant...
Ardvorlich Cascades
Ultraviolet Grade IV 4 100m John Watson & Angus Murray Jan 9 2010
1. 30m Start at the lower ice fall steepest section. Climb the first steep lip and take ice slabs up left through boulders to belay in front of steepest ice fall by a cave.
2. 40m Climb either of the two steep falls on the lip to gain the slabby ice, up left to a groove section to top. Belay far back at tree.
3. 30m Higher gorge fall. Take the steepest line just right of central ice funnel, crux step to cave then step right to finish in hanging runnel. Belay at tree. 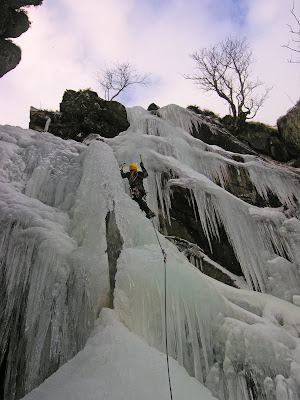 John Watson on Ultraviolet Pitch 3
Neon Lights Grade IV 3 100m Angus Murray & John Watson Jan 9 2010
1. 30m Start at the lower ice fall steepest section far right. Climb the 5m fall on the right and wander up right easily to belay under far right hand ice fall.
2. 40m Climb the superb ice directly or step left up easier ground and onto hanging ice slab, follow this left to a corner and top out to belay at tree far back.
3. 30m Higher gorge fall. Take the left hand ice fall in the corner under the big roof. Bridging leads to easy ground and belay on a tree far back. 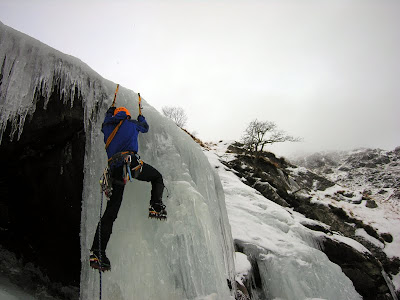