November 11, 2009
What is it about the magic 'a' grade at Font (6a, 7a and the even more magical 8a!). I guess these arbitrary grades are 'designed' by accident a bit like evolution's blind wathcmaker. They seem to be natural benchmarks of physical and conceptual progression in the forest, where restriction and history are finally broken, where something truly remarkable emerges. They always seem to have an 'edge' on problems beside them on the same scale and the true 'a' problems have an independent feel about them, as though jealous to retain their reputation from the others. Climbing them you feel they possess a hidden inbuilt code like the golden ratio, or at least a few extra digits of Pi! This could all be said about any grade, especially the new 'highest' grade, but in Fontainebleau, the feel of the 'a' problems is unique. They are a step above anything before and are worth seeking out if you are operating in the grade range.
La Marie Rose 6a - Marc Sweeney - photo by John Sharples
Marie Rose at Cuvier was the first '6a', climbed in 1946. However, it comes with a caveat. It should not be compared with more recent and numerous other 6a's as this was a watershed at its time. There is an interesting 'biological' theory called morphic resonance which reeks a little of the X-Files but basically says that once something has occurred repetition occurs more frequently and independently, allowing the same to happen elsewhere with more ease. It certainly 'appears' to happen, a bit like a magician's illusion, but just might be a statistical oddity. It might be an obvious statement, but until 6a was climbed, 6a was never climbed... 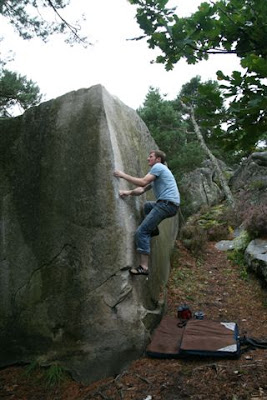 Michael Jeans on the forest's hardest in 1934 - L'Angle Allain 5+ (modern Brit 6a at least!)
'Marie Rose' is certainly a hard problem and feels about British 6b in modern money, but it's best to compare it to the famous 5+ nearby of L'Angle Allain to understand it. L'Angle Allain is easier with sticky shoes but at its time it was the hardest benchmarker (1934) and is more to do with foot friction and technique rather than finger strength and power. 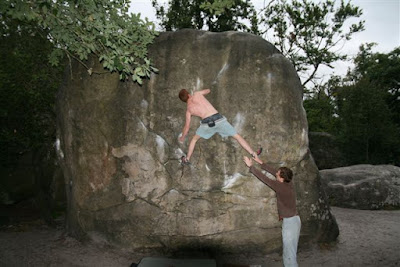 La Joker 7a Bas Cuvier - Chris Everett
The first 7a is still debated, with most opting for Abattoir at Cuvier, climbed by Michel Libert in 1960. This is certainly a real step up in technique, power and commitment, easily a new breed of problem, but my money goes on the more elusive and earlier La Joker, just round the corner from Marie Rose, climbed in 1953 by Robert Paragot. This technical and frustrating wall is exactly what a Font 7a should feel like. If you are climbing 7b at home, it will still kick your backside and scold you for any weak fingers. All classic grade-busters should feel 'value for money' and La Joker has crept to the fore as one of the forest's real classics. 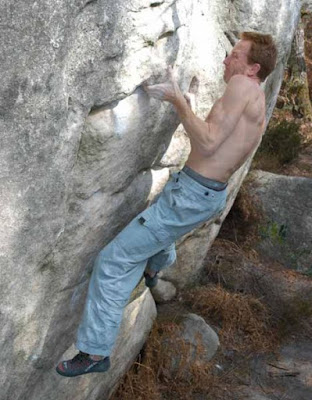 I haven't climbed 8a but Jacky Godoffe knows a thing or two about them. His development as a young climber in the forest broke down the higher 7th grades. He spent his youth working these grades into 7c's such as the famous 3 at Rempart (Fourmis Rouges, Tristesse and Big Boss). He discovered the plus sign with La Balance and Hypothese (two classic 7c+'s) until finally he climbed something which he thought worthy of the '8a' grade: 'C'Etait Demain' ('that was tomorrow'), an aptly named problem at Rempart which was climbed in 1984 and was prelude to a flood of modern 8th grade problems.

Who knows where it will stop. 9a is currently the Fontainebleau dream and a few are getting close, such as Dave Graham's 'The Island' at Coquibus, though the problem of link-up grading is rearing its head... is there a true 9a straight-up in the forest. If so, who has the keys to unlock it?

Modern 7a's are certainly easier money, go after the older ones for the true Font experience (Mur de la Fosse aux Ours etc). Here's a wee vid of my favourite 7a. Some say 7a+, but these modern roof style problems seem to bag the 7a grade too easily. A result of too much morphic resonance! Anyway, I always go back to this one, as it's a combination of power, fingers, technique and good balance. It' s not the Joker though...