Review of Monkey See Monkey Do 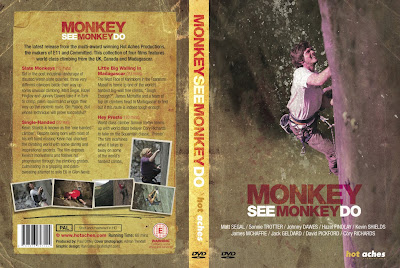 Each autumn brings two seasonal imperatives: Autumnwatch and the new Hotaches film. Unlike Autumnwatch, Hotaches give us adventures without wings.

The art of a good climbing film, especially in this saturated media age, is to tell a good story. Any film-maker should keep this truism close to heart and Hotaches don't disappoint: the 2009 film 'Monkey See Monkey Do' is a collection of fantastic climbing tales, focusing closely on character and motivation. Every shot is saturated with the emotion of the climber, committed to telling the inner story as much as the wobbling, sickening 'real' world of the climbing. Some sequences in this film had me frozen in disbelief, particularly in the highlight of the four films: Single Handed.

The first film is entitled Slate Monkeys and follows three very different climbers to the slate quarries of Wales. Matt Segal, Hazel Findlay and Johnny Dawes attack a classic slate route with a heady mixture of youth, canniness, experience and sheer improvisation. It is no accident that there are echoes of Stone Monkey and some of the sequences of Johnny 20 years on, smearing up a slaty chimney, palming and warping himself into the rock are nostalgic and timely. Talented American climber Matt Segal bubbles with awestruck enthusiasm over his hero 'Janny' while Hazel climbs with a boldness and suppleness inspired by the original film. It is an engaging piece and some great close-up footage of marginal smearing and Elvis shuddering on this most notorious of rock forms.

Film 2 'Single Handed' is the tour de force of this DVD and features Scottish climber Kev Shields and his struggles to overcome a hand disability to push his climbing limits. Not only does Kev have to work round a one-digit hand, but he has had to overcome the darker disabilities of epilepsy and depression. It is enlightening to hear Kev explain climbing as a way out of these restrictions and it is encouraging that he found the strength to make committing decisions despite emotional and physical compromises in his life. Kev refuses to accept the restrictions of being a 'disabled climber' and he sees in it the opportunity for highly creative climbing. This is what makes his climbing so inspiring - it's his creativity on hard routes in Glen Nevis and the Peak as he adapts and improvises to overcome what some would state as impossible. His technique and balance is a delight to see on film and his commitment goes beyond most climbers' ideas of rational limits. The sequence as he commits to a Glen Nevis solo is a truly brave step as we realaise for Kev climbing is an irreversible decision.

Film 3 changes focus and pans out a little onto 'Little Big Walling' in Madagascar. The impressive granite cliffs of this island paradise are scampered on by lemurs and some entertainingly bonkers Englishmen including James McHaffie, Dave Pickford and Jack Geldard. The blank granite walls are overcome with good technique, persistence and the highlight is the route 'Yellow Fever' which is the only multi-pitch in the world with the route description: climb the vine in the blank corner. The landscape is the highlight of this movie and the routes filmed make you feel like phoning freinds to see if they are up for a BIG adventure...

The final feature is a short delight as we follow Sonnie Trotter and his dedicated belayer Cory Richards in Squamish. The hot summer frustrates Sonnie's attempts on a hard granite trad route, but in steps Cory with his entertaining philosophy of belaying as an art in itself. Sniffing the rope like a fine wine, choosing his belay device as though from a selection of weapons and 'warming-up' to belaying with his unique rope exercises ('The Archer' etc) finish this fine DVD with suitable humour and diversion. The best line in the movie is left to the end, as Sonnie completes his route and the camera zooms into Cory, who shrugs and says: 'If you're not belaying, you're just climbing.'

Well done to Paul Diffley on the production of another superb Hotaches movie. Great editing, soundtracks and bountiful extras - including the superb Firestone E7 solo by Kev Shields, which will make your eyes sweat!!

The film is available now on Pal DVD on our main Stone Country site (BUY HERE). It's inspiring stuff and guaranteed to make you wish you'd done more over the summer! If a climbing film is judged by what it inspires, then this one lights the flame within.
climbing Scotland traditional climbing