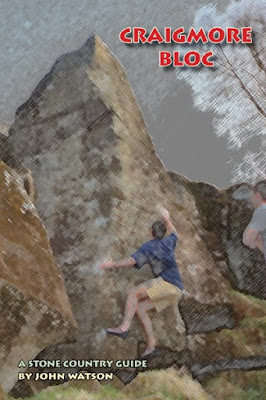 Having been beavering away at autumn projects at Craigmore, we thought we'd produce a guide to the bouldering here which will be available soon, but I was shocked at the amount of problems which have vanished under the moss. Have a look at the two pictures below, the first is of Cammy Bell on Leech Direct, a photo which famously graced the 90's edition of the SMC's Lowland Outcrops, while the second is the same wall today... 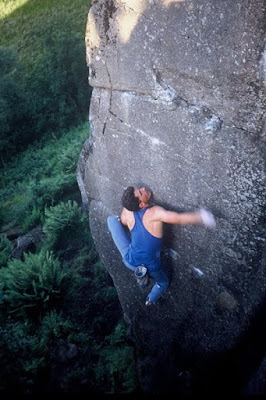 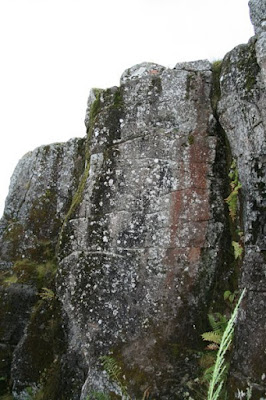 Leech Direct wall today...
I've started a mini campaign to clean up some classics here, starting with Wide Eyed Wall. Hopefully by next spring we'll have rersurrected some neglected classics at this magical little venue.

Possibly the growth of trees is shading more of the crag and global warming wetness has maybe encouraged the moss. The blocs in the forest are being left well alone as it's environmentally more important than climbing, but some of the classic crag walls could do with some attention: White Hope, Sunday Wall, Spinal Wall, Preliminary Exercise, Autobahn area (yikes, what happened to that?!), Sunshine Arete, Wopitee Wall etc

On a plus note, the leg-breaking excavations which occurred under Jamie's Overhang have been filled in with turf/pine leaves and the landing is now flat and bouncy... if anyone fancies a go at Surprise Attack 7b which is a superb dyno sloper problem.

Also, anyone with any historical notes or memories/photos, please get in touch, as we're trying to bring together some history for this neglected local crag. Email John Watson.