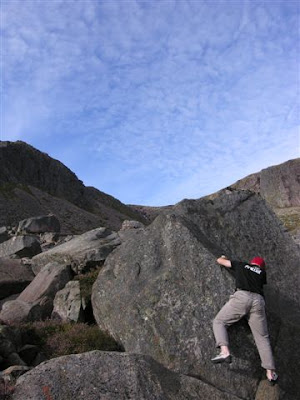 I'd never been to the top of Ben Macdui, shame on me, but once on the Cairngorm plateau it really doesn't look like a mountain top, more of a bowl of piled gravel so I'd never got beyond the Ben Avon basin. This remote paradise is far more spectacular and alpine in its dramatic sweep of rock and water than the plateau, so it tends to suck the climber downhill amongst the waterfalled crags into the heart of its monolithic geology.

The weather was settled with high pressure stamping out any hint of summit winds, so I took the excellent path up into Sneachda by the bubbling burn and over the goat track down into Shelterstone. Adrian Crofton and Graham Tyldsley were steadily inching their way up Cupid's Bow, so I took a break to boulder around the blocs, chased by unusually potent midges. I was lured into the big gully to the left of Sheltertstone by the bubbling sound of two Ring Ouzels boulder hopping. I'd never seen these birds before, though I knew this rocky talus and scree was their perfect habitat. Bouldering birds: you hear their chirpy hollers before you see them. 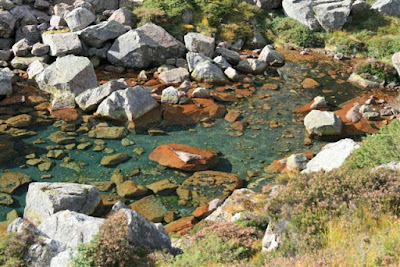 The gully was a deathtrap, surfing large mobile blocs as they shifted upon each other, but I regained the summit and walked up to Carn Etchachan summit. The basin below was resplendently still, Loch Avon a verdi-gris mirror pocked with trout rings. I looked about and saw the distant 'summit' of Ben Macdui and thought I should climb it as it is our second Scottish mountain, albeit with a rather bald dome. I thought I'd explore the plateau first and get to know this unusual habitat, taking some photos of whatever grabbed my attention: shattered quartz blocks that look like they've fallen from the skies; tufts of autumn-auburn grass like punks buried up to their foreheads; fluorescent green lichens on pink granite... this habitat has its own unique charms. 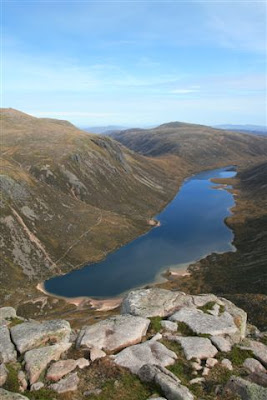 After an absorbed meander across the normally hostile plateau I'd rock-hopped to the the little trig-point and stone fort of the 'Grey Man'. Breariach swept its curtains of rock across the west beyond the Lairig Ghru and the air was still and echoey. The atmosphere was impressive, like an oxygenated bubble on the moon and your breath felt rarefied and precious. Someone arrived at the summit with iphone earplugs welded in, the little white leads banging around. He ran up the little stone fort without a word and tapped the summit trig like a chess clock... 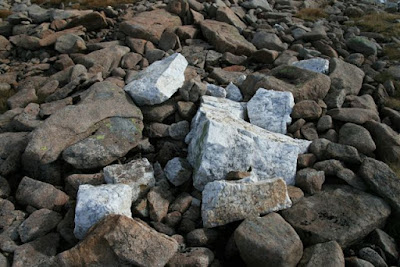 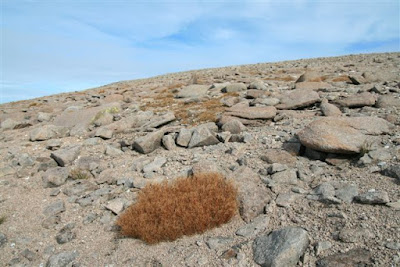 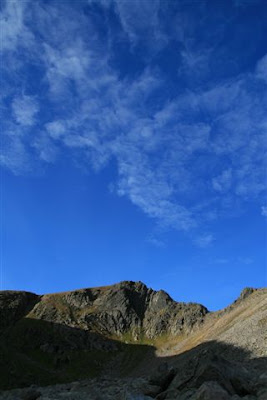