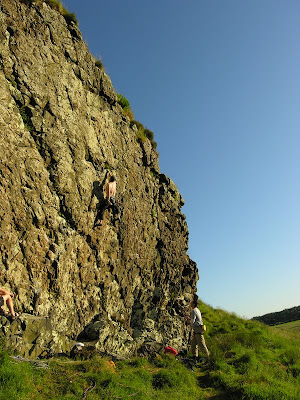 Cammy Bell enjoying the summer evenings at Dunglass
Currently we are developing the Stone Country Bloc Sport website to include a new series of area guides in pdf format, reworking Dumby and other Glasgow-radius crags with sport climbing included (so we'll have the new sports crags at Lomond and elsewhere...details to come!). These topos will also be available from the exciting new Betaguides website (due to launch in the next month or so - a complete database of bouldering in Britain).

For the new Bloc Sport webiste I've been embroiled in all things Joomla, which is frying my head, so can't promise anything too soon, so I'll put the topos up on the blog as soon as we get them. Here's an example topo from the guides, which we will be producing in guidebook format next year - it's the Dunglass sport wall: 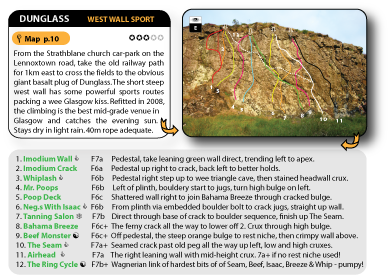 Dunglass has been a saviour for me over the early summer, acting as a good training ground to get some basic fitness back. We have fully bolted the West Wall (though the trad routes remain untouched, so no chopping - the existing bolted routes have been refitted and some other routes squeezed in between Steel Finger and Wall of Horrors, the two main trad lines). There are now around 15 sport routes in various combinations between 6a and 7b+.

The girdle project fell late last night in cool conditions to John Watson, which is now the biggest challenge on this crag at a Wagnerian 25 metres! It's called The Ring Cycle and goes at about 7b+, though I'd say a Dunglass 7b (with apologies to Cammy!).