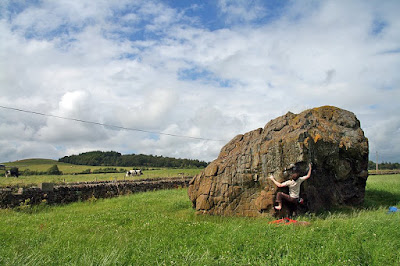 The mystery that is the Clochodrick Stone has always been actually finding it! Driving around the fields of Renfrewshire aimlessly is a prerequisite frustration. Eventually you stumble on this occasionally-glimpsed stone, nestling in the corner of a field much like a sad burst football. I still get lost, despite having visited every year for the last decade!

There is not too much to get excited about, but the straight-up problems are all fun from sit starts and perhaps the greatest mystery is the nature of the mythical 'Traverse'. I had heard Paul Laughlan used this stone for training before doing the Tunnel Wall routes, so I'm sure he worked out this traverse and used it as training. It goes about F7c, though nothing more technical than Font 7a.

Stewart Brown repeated the traverse for the camera, which we'll upload soon and will illustrate the best method. Basically sit start the south arete and turn the bulge and continue as low as possible round the north arete, low as possible across the crux north wall via crimps and a crux reach to a pinch, then drop down to the west roof and finish along this. It's a long outing and extremely pumpy, good for summer evenings if you're bored of Dumby. there's a F8a (Font 7b+) version finishing along the west wall sloper eliminate - hard to describe but you'll see it when you're there. 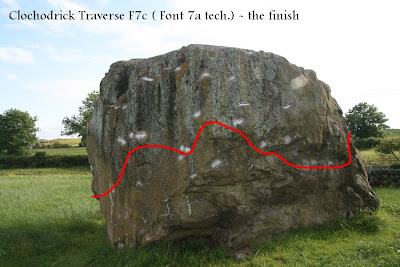