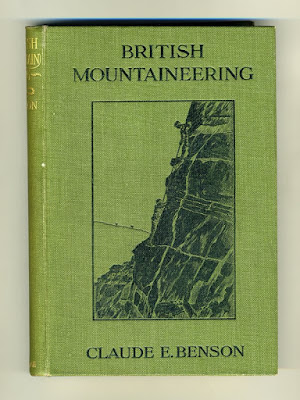 This is a centennial nod to grander times. In a light-hearted note and with top respect for the first generation of climbers (see the pic below, now that's bold), I came across some useful (and not so useful) notes from Claude Benson's superb 'British Mountaineering', published 100 years ago. 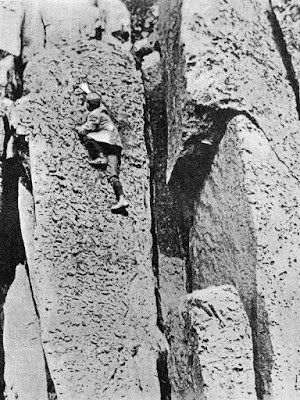 It includes a chapter on bouldering no less, though they did call it 'rock gymnastics', as though they were slightly ashamed of the low-ball games of blocage. The book is a delight throughout, capturing the lost nuances of climbing as it was with no little humour and some sage advice. What is most encouraging is that not much has changed - Claude is still obsessed with gear and like a safety-Nazi 'floorwalker' he bores rigidly about techniques (quite rightly, of course, we want to pursue risk safely you know). He does witter on a bit about the 'tweenie maid' (mmm, enough said... ) - reassuringly, however, he suffers the same frustrations we still do today: A new rope is troublesome. It kinks most obstinately. So with fond apologies to Mr. Benson, here are a few of his more poignant obeservations:

"Gaiters - No one who has worn puttees will ever think of gaiters again. Some people use Fox's Spiral Puttees, but, personally, I prefer the coarse Tommy Atkins' puttee as being better fitted for the rough work, as well as cheaper..."
Ah no, Claude, buy cheap, buy twice...! 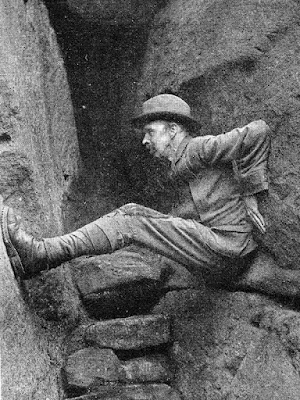 "I am blest with a basement staircase of stone, and at various points of the day I am to be found hanging by my fingertips to the outside thereof."
Claude, you just invented the campus board: finger-criminal!

"I recommend all who can to imitate me. Let not false shame prevent them. Let them be bold, and brave the suppressed laughter of the tweenie maid."
'Tweenies' now appear on CBeebies, or is it more sinister than that?

"Shirts - Flannel is the best material. Those made to take a detachable collar are the neatest."
Those modern wicking tops just aren't cool...

"Rope - there is only one kind of rope, the very best, the Alpine Club rope. It is to be purchased at Arthur Beale's, 194, Shaftebury Avenue, London, W.C., or at accredited agents."
See if they have one in the stock room, Gus. 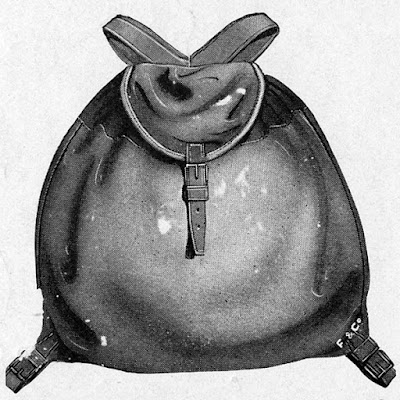 "Rucksacks - See that there are separate pockets in the rucksack. It is just as well to keep your lunch, your hair brush, and your slippers apart."
Claude, I'm not sure if you mean rock slippers or rocking-chair slippers?

"Most of the dangers connected with British mountaineering are unjustly debited to rock-climbing. This is a mistake and a mischievous mistake."
BBC reports a 'climber' plunged 600 feet' - some eejit in new crampons in June on a rock ridge: familiar?

"Never despise the smallest foothold. A 'toe-scrape' may make just the difference of getting up or down..."
Ah, you mean 'smearing', don't you Claude? 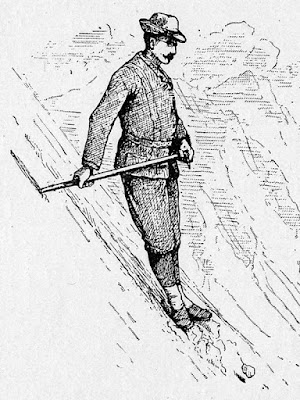 "As a matter of fact, provided a man can go steadily and safely, I think he may be entrusted with the care of his own legs and feet without printed regulations, and the same is true of the position of his hands on the axe. Sitting glissades are generally deprecated, though there is no form more common amongst beginners except that on the broad of the back..."

''without printed regulations"... well said Claude, you would have hated this century, I think... 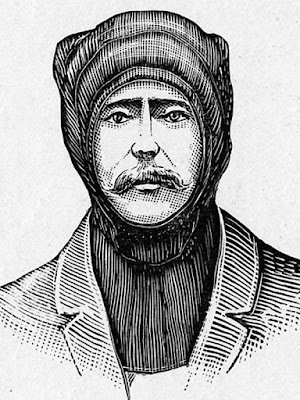