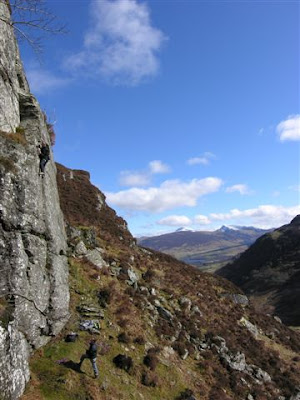 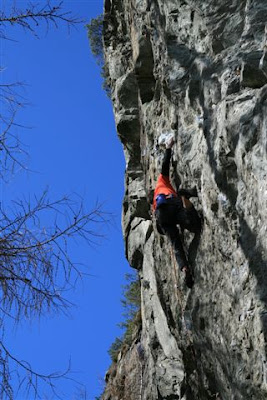 Adrian Crofton on an early redpoint of Marlena
It's been a chilly, windy and often wet spring on the west coast and central belt, so we've been chasing moments of blustery sport to wind up the fitness - tag-teaming routes to keep warm, redpointing with cold pumps and numb fingers, huddling under permadry crags sucking the smoky warmth out of a roll-up. Maybe it would have been better for bouldering, but trying to climb seasonally in Scotland means sometimes having to fight the unseasonable! 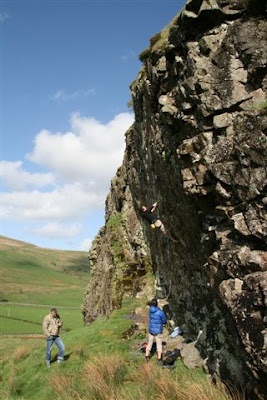 Colin Lambton redpointing Beef Monster, Cammy Bell checking footy scores
I was chuffed to see Adrian Crofton bagging Marlena after a dedicated battle and endless unfolding screams from the last move. Nic Duboust impressed with a near flash of Marlena and old-skooler Guy Robertson dug out his engrams for another repeat, while flying visits from Stewart Brown and Will Atkinson saw flash ascents of Hamish Teds, which seems to be the benchmark flash tick for the Facebook generation. 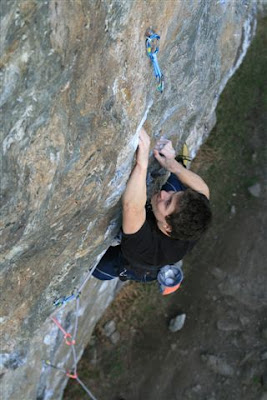 Nic Duboust on Marlena
Onsighting sports routes is good mental and physical training for any trad as it requires a little improvisation under pressure, which is the hallmark of trad climbing. I managed a few onsight 7a's, the most amusing of which was Fogtown at North Berwick, a route that had faded completely from my memory and on which I got stupidly cross-handed at the top, improvising a desperate cross-through and slap, nose against an unclipped bolt... then the pleasure of lying on the short turf plucking at grass, belayers' gri-gris clicking away, it seemed like summer had deigned to show its face at last... 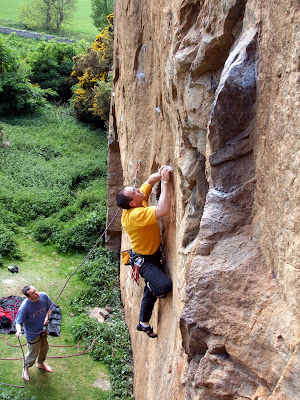 Up the sweaty crimps of Law of Gravity