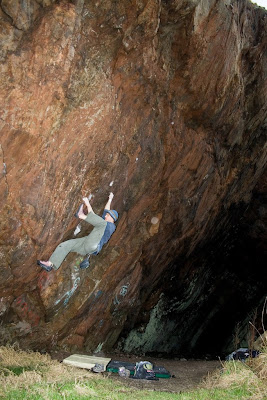 The caves at Cullen have seen some recent activity by John Brown who has an excellent set of photos on his Flickr site.

He climbed the entrance wall of the main cave, giving the new problem 'Cullen Skank', which wins my award for the best name so far this year!

Cullen Skank Font 7a FA John Brown 2009
St Loraine Black Lady's cavern (the one just behind St Duane's cave) - just to the right of the graffiti naming the cave. Standing start in a small slot and slopey crimp, up and vaguely right to finish high on two small crimps.

In Glen Nevis, Alan Cassidy was sheltering from a storm when he found a real bouldering gem in ahidden roof. After a quick brush and clean-up, he sent it down at 7b or thereabouts in his words, so expect some big power moves! Well worth seeking out apparently - look forward to finding it, Alan - I must have walked past it dozens of times!

The Hurricane Shelter Font 7b *** FA Alan Cassidy Jan 2009
On the path up to Sky Pilot, just above Cavalry Crack buttress. there is a flat grassy area. Above this is a large boulder forming a cave above a rocky ramp. This problem starts at the obvious blocky feature low on the the right and climbs the arete/lip in its entirity. Half way along the lip a tree forces a powerful reach to a good but sharp hold in the roof from where the lip can be regained (crux) and followed to a nice mantel out left.

Recently decanted from Ireland to Scotland, Pierre Fuentes, who writes a good blog, has been visiting the good and bad Scotland has to offer in terms of stones, though he's yet to visit the Northwest which bleaches out all else! Anyway, he thought Clova the highlight of the East Coast, maybe it's the homesickness for Glendalough and all those clustered stones? He reported one new problem, and thought maybe the grading needs revised overall... probably my own problems!

'Glen Clova was by far the best place in my opinion. Lots of cool problems in a beautiful valley full of silly sheep. Really great. It reminded me so much of Glendalough in Wicklow. We did most of the lines in the guidebook plus a few other ones that seem to have been cleaned. Also added a cool rockover on a boulder that's standing on top of another one (looks like a guy with a hat, video attached.) My brother called it the Bulgarian Lift, probably 6b although the grades there seem to be very soft.'
Pierre did a good introduction to Targassonne in France, available here at TheShortSpan.