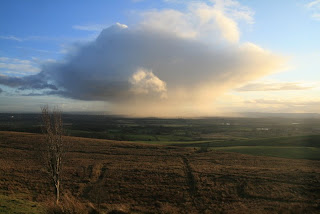 Anyone who has walked the low sandstone hills around Craigmaddie, sandwiched between the volcanic plain of the Clyde and the volcanic Campsies to the north, may have noticed some odd things. To the west of the crags there is an arena-like hollow with a triplet stone known as the Auld Wifes' Lifts. This is a heavily carved stone, mainly stencilled with the excessive initials of vigorous Victorians, suggesting it was a popular tourist attraction at one point. Jill was here, apparently, as was 'JR'. 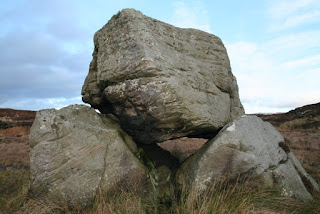 The myth goes that three local 'wifies' from neighbouring villages had a competition to see who could carry the biggest stone in their aprons. The third managed to set the biggest on top of the two smaller ones, with a smacking of her fat hands no doubt. Local traditions suggest the space under the main capping stone was crawled through by women to ensure they did not die childless, and no doubt the classic 'wedding' tradition of crawling through a hole together would ensure a fruitful matrimony.

Craigmaddie variously translates as 'the rock of prayer' or the 'rock of God', or 'crag of the dog/fox' (indeed, I have often seen a fox disappear into a sandstone bolt-hole in the heavily eroded rock) The Auld Wifes Lifts themselves are most likely a natural sandstone erosional feature rather than man-made, but they are certainly visually dramatic and form a natural 'druid-like' centrality in a hollow surrounded by raised platforms of rock. There is evidence through palynology that at one time a circle of oaks stood round this naturally sacred site. On the rock itself, rather ghost-like, older faces have been carved on the the blunt aretes of the capping stone, including a 'Fat Nose' face, a 'Monkey' face and a 'Keyhole Mouth' face - some of these are perhaps very old but the extensive 'graffiti' suggests some are more modern additions and copies. 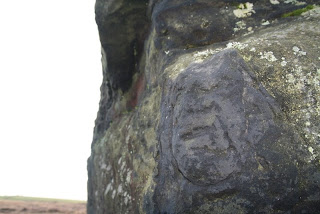 The area here has been quarried in the past for millstones (one of which is seen in the wall of the farm below). This millstone measures the same as the pecked circular form on a rock plinth on top of the main quarry, though this formation has been suggested as a sundial (it has an off-centre staff hole and markings on its circumference, next to a strange T-shape, see below). Whether this is a quarrier's millstone mapping and doodle, or a serious gnomon is hard to determine.  As usual, archaeology invokes the cloudiness of interpretation and highlights are more romantic leaps of intuition - were the petroglyphs simply carved by quarriers on their lunch hours, perhaps, to impress their children and family on Sunday picnics? Why should that be less sacred than a druid intoning over a gnomon?  The features of some of these markings, as well as the mason marks near the main quarry, suggest a playfulness and mischief-making - there are 'fairy footprints' and an 'all-seeing eye', but could it also be some of these carvings are a lot older? Whatever, it appears Craigmaddie has had a longue durée and a natural palimpsest of petroglyphs has evolved. There are many mason marks on a block of stone under a low overhang to the east, next to names and more modern graffiti (J. Neilson 1866 and A. Cairns). 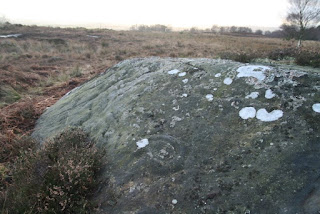 The All-Seeing Eye of Craigmaddie

Craigmaddie is certainly a perfect outlook for a neolithic settlement or later fortified site and there is plenty of evidence to suggest serious settlement and early farming before the peat formed and swept over the wet centuries of the iron age. A complete view of the Clyde valley would have been a fair site in neolithic, warmer climes, with fine viewing platforms such as the alp between the two tiers of crags. Here indeed is an old chambered cairn and a triplet of standing stones (one with faded ancient cup-marks) which suggests this was certainly a neolithic or bronze-age settlement, with the now vacant tombs of the chambered cairns lying in ruins nearby.  Water is abundant locally and there is a carved trough in the main crag cave which looks like a man-made 'basin', carved by an early farmer for his stock? But mostly the area is pitted with the large cog-wheel depressions where millstones were quarried from the bedrock.  The predominance of these suggests most of the petroglyphs and graffiti (on the Auld Wifes Lifts top surface, for example) are a result of more modern chisels. 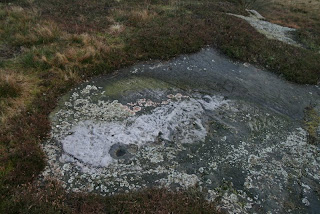 It's hard to tell, though/ Above the quarry crag is a fantastic 'viewing platform' with a  very curious set of carvings on flat gritstone plinths. The main one is a perfect 'pecked' circle with a deep 'post-hole' bored into its bottom hemisphere, with a distinctive letter H pecked out beside it. Outside this lie strange V marks carved into the sandstone and 10 feet a way a curious T-shape has been carved. These may be quarriers' orientation marks or outlines for their millstones, but might they possibly be earlier carvings to mark solstices and sun and moon positions - more research is required! Certainly the T shape mirrors the position of the standing stones quite eerily and is aligned on a rough east-west plane of the summer sun's ecliptic. As mentioned, it is hard to distinguish between quarriers' marks and earlier ritualistic carvings. 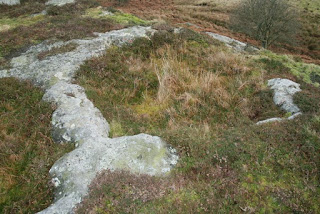 The mysteries and silence of Craigmaddie Muir may have been noised-out by Victorian tourism and quarriers, but the place retains the indelible stamp of a deeper history, like a faded signature. The place is a template on top of which modernity has copied emblems of what it sees as playful and meaningless. Separating them may now be impossible but at least the area, if you walk round it, retains some mystery in the low evening sun as the carvings pop-up in bas relief and surprise with you with their silent secrets.

If anyone can come up with a grand unifying theory, I'd like to hear it! 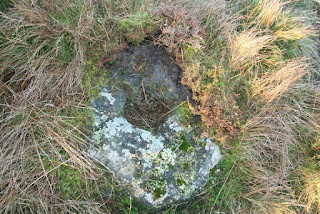 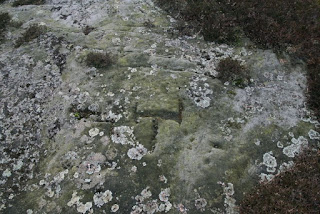