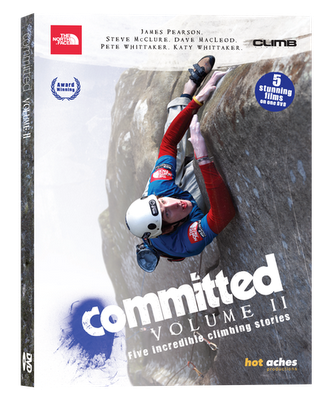 The Hotaches Committed series of films are now a raptly anticipated event in the climbing calendar year, and this new film, featuring five 'incredible climbing stories' is the best yet. The quality of production is superb and the film stories are future treasures of climbing documentary. They followed some high level traditional UK climbers throughout the year and the viewer is treated to an armchair sauna of the fear, trauma and elusive elation of high-end climbing.

The choice of stories is apt and varied. The first story begins with the thoughtful James Pearson attempting the 'last great problem' of The Groove at Cratcliffe Tor. This blank groove between two gritstone breaks was always deemed unclimbable but this did not deter James, he is filmed clutching a pebble the size of a peanut, rapt and intent... so this first film leads us gently into the microscopic obsession and invisible geometry of a climbing magician. The bizarre sequence of moves that James finally pulls out in a dangerous situation is a taster for what is to come in the movie.

Film 2, The Allrounder, follows the year of Dave MacLeod, who needs no introduction. The film captures the olympian levels of commitment and training that Dave must go through to operate at the highest level in each climbing discipline. It focuses on Dave's methodical and scientific breakdown approach, how he whittles a route's danger movement into a shape that is manageable for him both mentally and physically. Some of the footage is incredible indeed, especially the stomach churning insecurity of an attempt on the hard mixed climb of The Hurting, where Dave takes a sudden fall into the abyss and we are left wondering about the outcome until a rather relieved post-credits sequence! Dicing with death is an essential part of a climber's make-up and Dave explains how he travels the world preparing for portentous trad routes: training in Spain, repeating other hard routes with apparent ease, such as If 6 Was 9, a notorious Birkett route from the Lakes. This film is enlightening and shows the hard work and sacrifices of a climber attempting to maintain the highest levels in a largely unrecognised 'sporting' event.

Film 3 - Grit Kids - is the new generation of trad climbing, showing the natural and unfettered enthusiasm of youth on 'God's Own Rock' (grit). The 'kids' are the Whittaker siblings, whose flexibility and maturity on rock allows them to pull off some of the most incredible new grit ascents. Pete Whittaker turns his flexible mind and body to the contortionist's nightmare that is his own new route Dynamics of Change, a long-sought solution to the Braille Trail direct start. It was inspiring to see the kids approaching hard and dangerous extremes with an understanding rather than bravado and recklessness. Katy Whittaker's ascent of Kaluza Klein is just as eye-popping and thrilling!

Film 4 is a shorter one, following Steve McClure on his cool and quick repeat of Rhapsody at Dumbarton. This we may have seen before on E11, but the fall from the top moves is still a real gasper! Steve made this route look so doable and the moves so fluid, I went to the cupboard to get my sports ropes out. An inspiring sequence on the benefit of pure fitness in climbing, not to disrespect Steve's sheer talent on rock.

Film 5 is the highlight of the lot, returning to the remarkable James Perason and his 'silly obsession' (as he calls it) with the vertiginous blank wall of Hartland Point in Devon. This blank wall is unpegged by James ('given a facelift') and he attempts a clean ascent of the wall. The danger inherent in this route is superbly captured and its atmosphere of lonely leading above crashing waves is dark and very close to mortality. The fall he takes on this climb is simply terrifying and I could hardly watch as he returned to try and complete the route...

All in all, this is a an essential DVD for any climber's collection and one to return to when you are needing some inspiration for pushing your own limits! Well done to the Hotaches team, you can buy the DVD from their website HERE.