September 26, 2008
The far northwest coast north of Aberdeen was always a bit of a blind spot when we did the guide, not much had been developed or found there at all. However, things appear to be changing and after a tip-off from Chris Fryer, Russell Birkett developed the steep wall at the Buchan Ness lighthouse, a full topo is available here. Neptune's Kiss looks like a local classic! 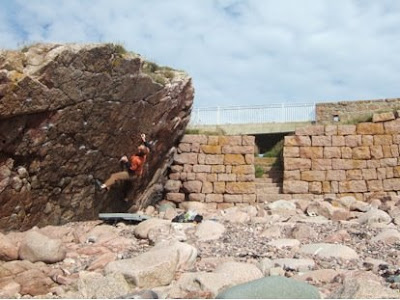 Buchan Ness - Neptune's Kiss Font 6c
For stamina freaks and sport climbers looking for training problems, look no further than the classic traverse at Boltsheugh, Newtonhill, Aberdeen. Guy Robertson managed to eliminate as many jugs as he could and ended up with the Newtonhill Powerband, a staggering F8a+ traverse. 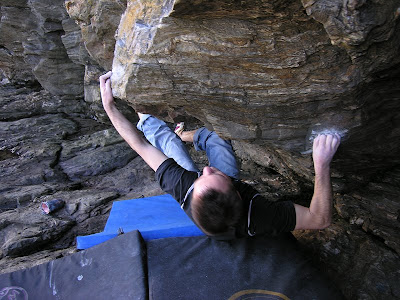 ’s (Moir) low level traverse without any of the jugs / resting holdz. Probably F8a+, whatever that translates to in bouldering money (don’t ask me!). It’s a pretty cool prob, and to my mind cleans up all the many variations on variations that have emerged over the years. The basic rule of thumb is “if you’re wondering if a particular hold is in, then assume it isn’t”! The only exception to this might be the big left-facing side-pull that forms the bottom left edge of the half-way block.

You'll need a guide if you go, but the rule of thumb is good, very similar to the classic traverses at Dumby such as Consolidated and the 'new-Dumby-classic' Shattered F7b+ on the everdry wall (repeated recently by Peter Roy, Jeremy Love and Malc Smith). 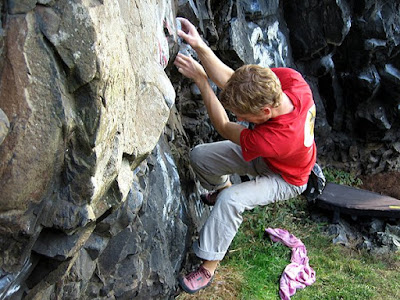 Steve Richardson on a 2007 repeat of Shattered Traverse, Dumby, F7b+
Just left of this in the through-cave, Malc Smith is currently working an extended traverse from the Serum of Sisyphus start through Perfect Crime and into Sanction... he's been close but not quite, falling off trying to get onto the slab. I doubt anyone will steal this immense problem from under his nose. He recently repeated Sanction (Dumby 8b by Dave MacLeod) after gluing back on a crucial block that had shattered off from a fire some one lit under the basalt roof. He also repeated the desperate dynamic sit start to Chahala which he reckons is hard 8a+ and not 8a. 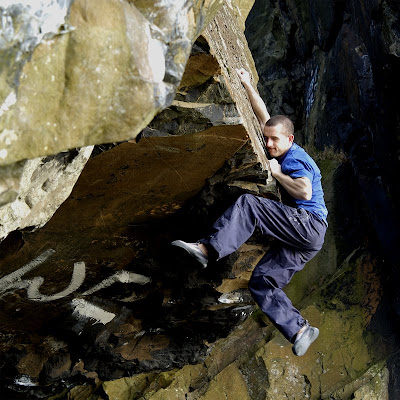 Mal Smith, Scarpa powerhouse, on an early ascent of BNI Direct... pic Tim Morozzo 2005
The 'outer circuit' at Duntelchaig has been seeing some great development on some fine-looking steep walls. Richie Betts informed me that 'local youth' Mike Lee had succeeded on a nightmarish crimp move on the Knifewound Wall, to give the area another classic 7c... The Settler might even be harder. Richie will be doing us a topo for this soon and it looks like some good clean classics are beginning to appear outside of Ruthven and Brin. 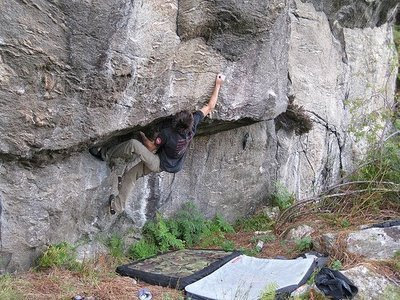 Mike Lee on The Settler Font 7c Duntelchaig Pic Richie Betts
More news to follow as I receive it... just in! MacLeod sends the ridiculously long traverse at Sky Pilot!! Big Long Now (I can't believe it's only 8b!) traverses almost the whole length of Sky Pilot Crag from left to right (go and have a look!), which Dave used as stamina training for Echo Wall. The whole story is on his blog but suffice to say, it is an almost ungradeable and boundary-smashing climb in which Dave specialises, creating his own unique approach to high-end climbing. He really is dissolving all boundaries within our sport, creating a new discipline of meta-climbing (okay, that's one for the philosophers). Grades seem to be useless abstractions in cases such as Dave and Malc's recent superlinks... where numbers fail and commitment takes over...