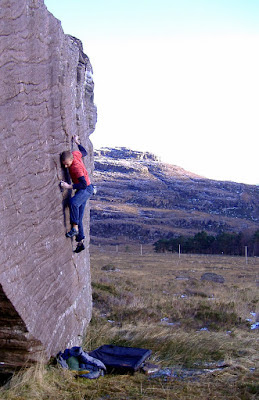 Richie betts on The Mission - Torridon - pic by Ian Taylor

Scottish bouldering news that has filtered through to me on the drip-feed...Richie Betts has been the most committed blocboy this month with the first ascent of the oft-spied project of the rippled wall on the Ship boulder, Torridon Campsite... he managed to find a sequence trending right on this very blank wall and thought it Font 7b+, probably worth V9 for the commitment to this far-flung corner of the bouldering pantheon. Here's the story:

Just got back from Torridon where I managed to climb south face of the ship boulder via the slim groove on the right hand side. Ian pointed me at this a few weeks ago and it's a great line, visible from the road as you come down the Glen. It looks like it should be fairly easy as it contains the only real features/holds on the face, and these look massive compared to the blank wall to the left which is just covered in shallow ripples and pebbles. However...It ended up being much harder than it looks, reachy, crimpy and tenuous. I wanted to climb as direct as possible into the groove and found a 'French' start off the mat, stepping on and catching a crimpy pinch thing, then spanning out right for a good crimp. Turn the pinch into a sidepull for the left hand, work feet up and go again for a smaller but positive crimp with the right. Then left foot up onto a smear and slap up into the groove with the left hand for a good crimp just under the obvious flat jug. Get the jug, match it, build the feet up and over with the right hand for the spike on top. Job's a good 'un.

Check out some cold-looking attempts here:

Tom Charles-Edwards finally cracked Turbinal Nose at Glen Croe, saying it is maybe 7b+ if you're tall...it's proving a popular project problem and one of the gems of Glen Croe.

Carrick Castle continues to be worked, though the projects are so hard that there may not be much news for a while...however, there is a supposed Traverse of the Gods on the crags up there, so hopefully we'll get some photos soon. 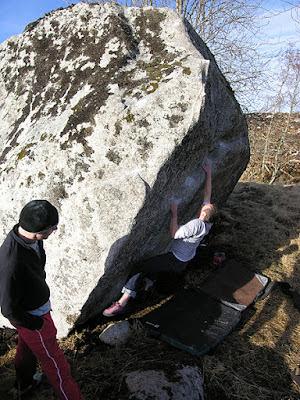 John Watson found some new lines in Glen Coe, the highlight being a V7 on the Rannoch Moor stones, named Galtee Merci - a superb granite roof with holds!! The boulders and problems are pretty obvious as you pass the burnt forestry on the Rannoch moor, and yes, the boulders are bigger than they look. 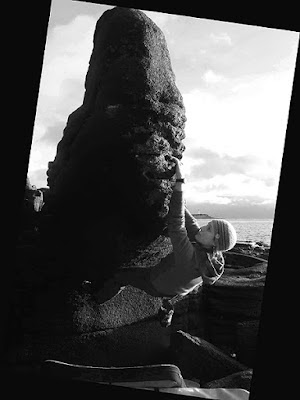 BTW there are girls bouldering too, lest I be accused, but really there should be more new stuff from the lassies, come on where are you? Claire Youdale is living on Arran and working round the venues there.. she reports enjoying the gabbro of Kildonan... lots of very enjoyable problems here, though usually there is a fine cushion of sand under the walls.