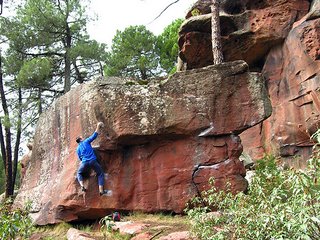 You would be forgiven for thinking Spain a hot limestone potato balancing on the nose of Africa, too hot and steamy for bouldering, one for the sports climbers maybe. Well, a little research and googling dragged up some interesting counter-points. The mountains are cooler, anything over 1000 metres and the Pinus Negris forests hide boulders and rocks entirely alien to the geological bully that is limestone, and the temperatures are more convivial to holding slopers. What I found hidden up here looked suspiciously like the clean red Torridonian sandstone of the North West of Scotland, nestling in the cool shade of pines. There was one online topo and a few photos that persuaded me to book flights to Valencia. The place? - ‘Albarracin’.

Albarracin is a remarkable medieval town perched precariously on rocky slopes in a deep valley in the Montes Universales. These mountains lie west of Teruel (two hours drive north from Valencia airport) in the province of Aragon. A ten mile straight road along the Teruel plain leads suddenly into a winding limestone valley with deciduous trees and flowing rivers. The road winds up to the trumpet blast of the walled town that is Albarracin.

The town behaves like it was banished to a remote corner of the Spanish classroom, with its pointy dunce cap of a church spire. It crowds in on itself with charming introspection, narrow alleys and leaning houses provide a maze of trendy bars and restaurants, all perched on top of each other in a noisy palimpsest of classic Spanish architecture and culture. It is a fine place to visit in itself, but just outside of town, leading up to a rocky plateau covered in pine trees, is a choked gorge that wouldn't be amiss in a Hollywood western... large red sandstone walls and buttressed boulders leaning every which way.


A curious pink sign leads the way: ‘Pinturas Rupestres’ and a faded pictogram of some sort. We booked in to one of the many auberge-style hostals (there is camping and chalets available nearby as well) and I listened to the clang of church bells as I packed my boulder kit and wolfed down some bread and cheese. The wet weather front had passed and the boulders would be dry soon…

The road below the walled town breaks left over a river by the excellent basement Bar Molina de los Gatos (the local climbing bar with climbing magazines, bouldering photos, chilled locals and plenty flowing beer…) and winds up to the plateau and a large car park, where German camper vans and small huddles of boulder-mats suggest this is a major new European bouldering venue. The plateau is vast and disappears over rolling pine-clad hills with tempting buttresses peaking out on the escarpments. Most people come here to visit the remarkable 'pinturas rupestres', which turned out to translate as ‘cave-paintings’. The caged-off petroglyphs are good way markers for the boulderer and worth a circuit themselves… 'El Arquero' is probably the most evocative: a lunging archer with dangling appendage on the verge of the kill... other pictures depict the hulked backs of bulls, surprised deer, the hunt in full flow, the gentler beginnings of animal husbandry and other ghostly abstractions of a harder life in a place I now see with the leisured eye of the 21st century. I have come looking for a bouldering paradise in a rented Seat Ibiza… and am thankful for such luxury to enjoy parts of the planet such as this.

I wandered aimlessly and eagerly through the forest getting lured along by better and better boulders, chalked-up problems appeared here and there… the whole place reminded me of a Fontainebleau before the gold-rush. The only people I saw were mushroom hunters wandering in circles with baskets, occasionally shouting to colleagues when they found ‘rebollons’ or such-like delicacies. I was hunting for rock mushrooms, perfect shapes, morphic bells of movement as it were... I was not to be disappointed.

The red sandstone varies in quality, but the areas are extensive and good problems can be found round every corner, or in alleyways of boulders and walls. Landings are generally good and sandy, but you do have to watch out of the odd tree-root or embedded boulder. There are slabs, lots of roofs, rounded perched blocs and flying buttresses…the full gamut of the boulderer’s requirements for a classic venue. The weather is generally cool and sunny, though I had picked the wettest week of the year in November. Despite that, it dried off enough to bring the locals out…they were found in noisy encampments round new projects further afield from the obvious areas round the car-parks.

It is a large area that would take many visits to become familiar with, for the problems can be well-hidden and areas meld into one another. That said it is such a magical forest that comparisons with Fontainebleau would not be unjust. The rock is rough and climbing as technical as you could wish for. The best moments for me were bouldering alone, pulling moves to the aviary sounds of bird-song, the rock cool under the chalk, the juniper and pine incensing the air. It is a good place for a posse though, I came across plenty of pods of (mainly Spanish) boulderers surrounding particular test-pieces, arms outstretched spotting to the barked shouts of ‘Venga! Venga!’

There will no doubt be forthcoming guides to Spanish bouldering (possibly from Stone Country), but there is enough on the web to get you there and find yourself a few grudge-matches! The best topo I have found is at:

while there is also an atmospheric overview at:


Popular posts from this blog