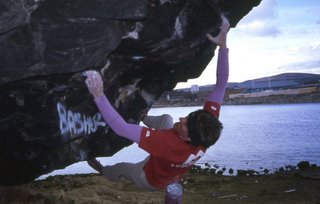 Dave MacLeod on 'Smokescreen' original method
Alan Cassidy has reported an intriguing new version of Dave MacLeod's Smokescreen, originally a desperate Font 8a+, it has now been reclimbed at a more amenable grade of Font 7b+ . Alan said he discovered a go-again slapping sequence that got him up the crux hanging slopers.

It goes to show that there are often other perspectives to problems, and that it is worth trying all sequences on your projects just in case... it also shows how rich our climbing world is... other people can often produce radically different results and it is worth absorbing as much as you can from watching other climbers. It's where you learn all your technique after all. Well done to Alan for discovering a sequence that will make this tespiece more accessible, I hope Dave is not too disappointed to hear the news... it won't make Pressure any the less impressive, but will mean there is an easier finishing sequence. That said, finishing up Firestarter is the next big challenge in this never-ending game of rock poker!