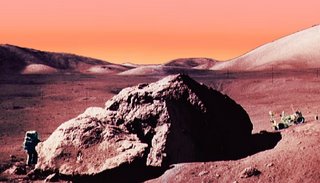 ‘Like morality, mountaineering ethics looks to be a matter of discovery rather than
decision, and to some degree always a matter of conscience.’
Rai Gaita – ‘Sacred Places’


What if we colonised Mars? Think of all the new rock, the new gravities, the new climbs? And what about ethics; what lessons would we bring from Earth-climbing?

It could be argued that we are more ethical climbers these days and ‘ready’ to colonise: we have a well-documented knowledge of the do’s and don’ts around this inanimate, oblivious stuff called rock and ice. We know we are not supposed to take drills to mountain crags, or retro-bolt others’ more vital achievements. Most feel secretly guilty pushing winter climbing onto bare summer rock routes. Or we watch films, instead of relying on the traditional mythic story-telling, to reassure ourselves the ‘purity’ of ascent is guaranteed. We resist hammering and hacking at the stuff because we know we’re just not strong enough. And we repeat routes while respecting their historiography (we revere the term ‘classic’ and carefully delineate ‘extreme’ grades).

We can get away with nothing, it seems, because we know so much. We have a history and ethos behind us now and something by which we can gauge our present ambitions. Some would say we should be behaving ethically because we know better. Or is this not the case and not supposed to be the case? The hills are about freedom, some say: they do not have to bow to history and its ethical tapestry of occupation (in other words, throw your guidebook away). To put it bluntly, are we doing our common knowledge justice, or are the hills and mountains simply, as they would have been originally, our own virgin challenges, where we bring, maybe even create, our own ethics? Whose right is it when we approach the mountain?

Maybe this question is unanswerable: it is like asking you not to imagine the colour red. We can’t plead ignorance either, as any traffic cop will tell you: ‘excuse me officer, what Highway Code?’. In fact we hunger for information, just so that we don’t go wasting our efforts over something someone has already done, or we want to know exactly which RP will fit in that knife-thin crack. Most of us would admit to wanting to know the ‘beta’, even if that simply means ‘has the mountain been climbed?’ ‘What grade is it?’ is now more common than: ‘Has anyone climbed that?’ My point is, how should we react to this wealth of information and how much should we know?

From my own personal experience ethics comes from the things you’re most proud of in yourself, so therefore you must first do something you’re proud of. Your first lead, for example: you’re pumped ragged above some inexperienced gear-placement, but you hang in there, work out the moves and do the route. You ascend. Now imagine someone bolts that and at a future date in a future pub, a climber new to the sport, says: ‘Oh yeah, I’ve done that as well, hard second clip, eh?’ Ethics can turn you to murder.

The big question here is: how do you unlearn such occupation, how do you educate that sense of what the route used to be?

To answer this, it is a matter of forgetting. I have had times when I’ve forgotten the guidebook and my partner and I have on-sighted walls and these have been dangerous and happy and more worthwhile activities than all the ‘head-points’ in the world. I am in mind of a Ben Nevis buttress called Carn Dearg, where, on pitch two of the ‘classic’ route called ‘Torro’, the topo I’ve ripped out of the guidebook goes fluttering from my pocket and past my second like a nostalgic piece of ticker-tape. We both experience pangs of horror at the sudden onslaught of the unknown and retreat is actually discussed. Hunkering under the roof of the belay, it takes a while for us to slough off the cape of fear and actually climb. Needless to say, it is all there and we on-sight the rest of the route, forgetting all the way, and it is easily the best route in the world when we top out.

So, another part of me says we should sometimes ignore the rights of history, or certainly its excess of detail. Then again, maybe humility is intrinsic to climbing: sometimes I feel better when I know a route has had many thousands of ascents and I can maybe revel in its original atmosphere as my ego is drowned in its histories. Those days can be very happy when there is nothing to boast of but plenty to revel in.

I have stood at the bottom of routes and counted winking silver bolts and felt saddened. And it is predominantly a sadness about all this hubris and desire to colonize rock for the self, to name it, to grade it, to attribute it to oneself. We all know mountaineering needs its hubris and appetite and machismo, or some things would not be attempted. We know the history of climbing is predominantly about hubris: maybe it is not the mountain we are trying to conquer but others and their disbelief. That can be admirable but we must always remember the vitality is in the climb and how the climber meets the mountain. The summit is always a lonely place and so it should be. Summit photographs never quite seem to get it. And climbers say notoriously inexact things about the whole affair. ‘Because it’s there…’ is not what is meant at all, I’m sure: we just can’t express the whole complexity of the mountain and the climber. Which is also good, because through our history we see that this thing is quite inexhaustible and can always be approached at a personal level.

History brings us different gravities. Older climbers – The Bell’s, the Murray’s and the Cunningham’s - appear to us as having climbed somewhere else, almost as though on Mars, yet we touch the same rock. It is maybe impossible to truly climb ‘free’ in these days, but it is worth noting that climbing is something only you personally can be proud of: it is all a story of discovery and conscience.