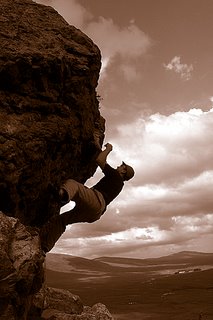 ...some pics from high stones being developed despite the summer heatwave. There was a surprising find in Glencoe, also a new area in Arrochar and a picture of a boulder that looks like a Scottie dog, sent to me by the intrepid Lee Robinson on his annual pilgrimage to Applecross and Torridon. 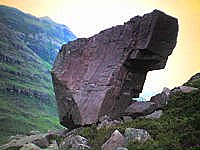 Lee reports some cracking new boulders in Applecross, slightly further afield than the Kishorn boulders, but not too far away by all accounts... also some good bouldering along the coast south of Applecross. North of Applecross there is the huge cave at the MOD station, beside a fine beach, this is a super bouldering area if it rains, you can traverse back and forth at will until you're blasted. 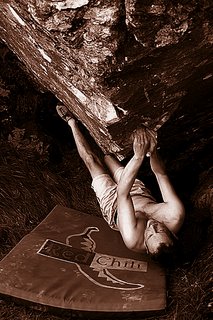 Colin Lambton on 'Crush', Blaeberry World, Arrochar
New bouldering areas in Scotland are increasingly nudging up the contours, especially in a hot summer such as this. I noticed on Si O'Conor's blog that he has been busy at Clisham on Harris, some nice pics of the boulders there, how about a wee video or two Si? As mentioned, the Shelterstone is seeing some attention, and the high boulders around the Cobbler and Narnain are a little cooler if you can be bear the sweaty stomp. Good for losing a few pounds with a stuffed mat...
On a more accessible note, near Aberdeen, Tom Kirkpatrick added some good problems to fine new areas near Portlethen: Cammachmore and Arnot Boo, where the haar will keep things cooler. They are a mere five minutes walk from the car or bike - check out his topos on the wiki at www.scottishclimbs.com
Also worth a look is Ardmair crag near Ullapool, with some fine obvious problems on the crag as well as some hidden bouldering on the boulders underneath the crag - a little warm and tick-infested at the minute, I believe Ian Taylor has the gen on this area, maybe worth a topo when the bracken and insects die back in September.
Glen Rosa on Arran has also been visited - hopefully a topo of the best boulders here will be forthcoming. It's a glen littered with superb problems on fine stones, some secret gems and also some very blank slab projects! Coming soon...