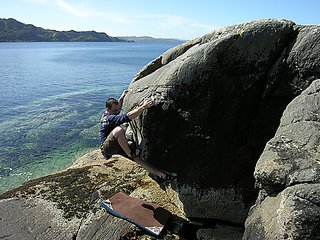 Imagine a climbing world without any documentation, or need for it... it wouldn't look much different: the high peaks would still look untrodden, the rock faces immutable and unknown, the boulders just attractive lumps of swirling geology. We would come across signs of climbing only on close up: chalk marks, rusted pegs, bolts, rotting slings and wonder what sort of experiences they had found, what successes, what failures: the act of having to imagine your way forwards is always preferable than following an arbitrary trail laid down on paper. You can get too divorced from it by proxy, which is why it is important to simply go exploring on your own: bouldering, soloing, walking: and not take any maps, or topos, or blog cut-outs... just finding your way on a good day over some fine rock is enough.

Not that I want to knock sales of guidebooks or anything, but Scotland is still a land of adventure and summer is the time to get out and do just that. On a sunny day on a remote peninsula, for example, you can cover a lot of rock and in the evening catch some fine sunsets, if the midges don't send you indoors early. It is a time not to fret about repeats, grades, ascents and non-ascents.

A point of note: I was tending to a call of nature when I heard two noises like burst tyres behind me. When I turned, I caught two porposies breaching yards from the shore. In the clear water, I could see their languid eyes and their lithe black bodies roll effortlessly between their world and ours. I wondered what internal map they were following; if this was part of a porpoise-circuit maybe. I wondered if they saw me and puzzled at what internal tugs I was following in my own weird, heavy world of colour and light... then I got one of those moments of lucidity: they were simply enjoying the flat calm, the rolling, the breaching, the clarity of water - all the things a porpoise does well they were doing well. So assured, I went back to some random climbing.