The Thirlstane has been maintaining its popularity for repeats of Sav's old problems (my God, that sounds dated already, I can still see Paul cranking Font 8a's on the Ibrox wall at will in the 90's, as part of his circuits!) - though the exact sequences and rules for the hard eliminates such as Chinese Democracy and Shrinking Violet remain to be clarified - I would say if it feels easy, you're using an illegal hold! That said, there have been impressive repeats: Tim Carruthers (June 2003, repeating Shrinking Violet and Tied Up and Swallowed) and Tim Rankin on SV earlier this year and just this month Niall McNair completing CD, admittedly finding an 'easier' sequence by using a logical foothold that may have been 'out of bounds' on the original, but just remember how bendy Niall is - a monster rockover or mantel is meat and drink to him - I guess in Font they would call this problem 'morpho'. Well done to Niall! He says:

Dropping a line to let you know I have just repeated a certain hard prob of Paul Savage's- "Chinese Democracy" (given font 8a or v10) at Thirlstane which took me 3 short visits over the weekend. Dont know if you've tried this but I found it suited me with some houndini-esque contortions on the crux (as for Tied Up and Swallowed), thus i found it much easier than King Kong at dumbie.

Paul, if you drop in, let us know your sequence and eliminate rules - I know your 8a's are no scooshes...! 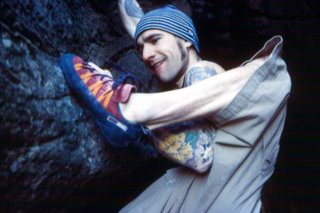 Paul Savage on his own Chinese Democracy

There have been rumours as usual of hard problems in Skye, as well as promised film footage from Si O'Conor, but this has not materialised online or on anybody's doormat as a CD - which is unfortunate, as some good raw uncut footage of Si climbing his own problems might resurrect his reputation from the dead.

More positively, James Sutton has nearly completed his Boulder Map of Skye, entitled 'Gabbrofest' - I've seen a proof copy and it looks an inspiring piece of kit to stuff in your mat... a lot of research has gone into it, so I hope everyone buys a copy once it is available. Check out www.betaguides.com for news on publication.

At Portlethen, Tim Rankin climbed Kayla Font 8a, named after his new baby girl, but in a tantrum of pure power, local hotshots snapped the heel-toe lock hold, so it's back to project time Tim boy!! I'm sure Clashfarquhar, or one of the the new NE venues will give up another desperate NE testpiece soon enough, or even a harder repeat of same problem?

At Loch Lomond, Tim Palmer climbed the dirty lip of the boulder by the Rob Roy Cave sign, giving Is That All There Is? V7, after coming close on The Bottler Arete project... some large boulders lurk further along the path, with excellent projects, but it's a hike to get to and an infested jungle come June-September. A dry spell in Spring or in October is the time to explore this peaceful jumble.

Ian Taylor did a few new problems at Reiff In The Woods: the best of which are Clach Mheallain V6, which takes the arete that Pebble Mill avoids, and the excellent Teewhuppo V4 - the highball arete on the Patio boulder which is also the start of the Breathalysyer. He also clarified a few eliminates at Ardmair - one of which John Watson completed to give a second ascent, but possibly by different sequence, of the excellent roof traverse of Cup Run V6/7, in honour of the mighty Gretna of course.

Craigmore came into condition only for a few magical days this cold, wet spring, and John Watson unearthed the 'invisible' problem of Merlin Font 6b - the wall just left of The Beast. A technical little gem reminiscent of Bois Rond bouldering, this adds another classic Brit 6a/b to the circuit of problems around this grade. Completing the circuit is as good as a Font Red circuit, just use your imagination a bit! I'll put a guide up for this soon, for Glaswegians who actually rate this brilliant little crag as a bouldering/soloing venue, all three of us! 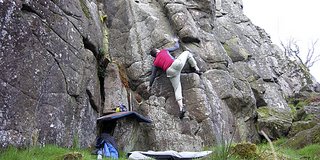 Allan Wallace has been busy putting a topo together for the Campsie boulders, so we look forward to that - if you like to boulder between V0 and V3, there is an excellent circuit. Colin Lampton, John Watson and Pete Murray brushed and climbed most of the obvious lines in the last few years, and Allan has added some problems in the V0-V3 range, so it's good for an enjoyable circuit on a breezy sunny evening after work - head up there and climb at will - some of the problems, despite being wee, are good fun and well settled by now, so don't be snippy about weathered basalt - it is Glasgow after all and not the Peak!

Craig Henderson has been beavering away at Larbrax - hopefully by the end of the summer a good circuit will be established. It is a tidal venue and needs a careful watch of the BBC tide tables for Portpatrick - only a few miles south: the crags are described in the Lowland Outcrops SMC guide - the bouldering obvious at low tide.

At Dumby, in the vertiginous shadow of Rhapsody E11, Dave MacLeod found a new 7b on the back arete of the BNI boulder, called Sugar Rush, and after someone took a chainsaw to the Sycamore tree on the Eagle boulder, Steve Richardsoon climbed the excellent revealed groove of Torino Sun, at an amenable Font 5 plus. Steve was not party to the chainsaw masscacre however! 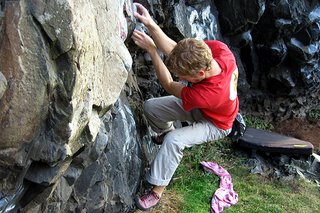 Any other news, please let me know, even if you enjoyed or hated a venue, it's good to hear what you think of the rock and the venues, aside from the Forum politics and backbiting.

Oh, and a wee taster film for the book Stone Play can be found on the main website as of May 16th... the book is on schedule for late 2006.